How primary teeth come through 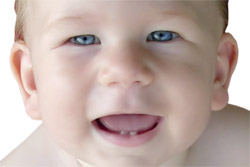 Normally the first set of teeth begin coming through after about half the tooth has formed. We don’t usually think of a newborn baby as having teeth, however, at birth the top half of the tooth is almost completely formed but are hidden from view in the bone.

Despite many theories, no one really understands or knows the exact mechanism for tooth eruption of primary and adult teeth. The periodontal ligament, which is the ligament that joins the tooth to the bone, is thought to be responsible for pushing the tooth from the jawbone, to the mouth.

When the primary teeth come through

The time that teeth come through (erupt) can vary, but as a general rule, the tooth will usually come through within 3-6 months of the below timeframes: 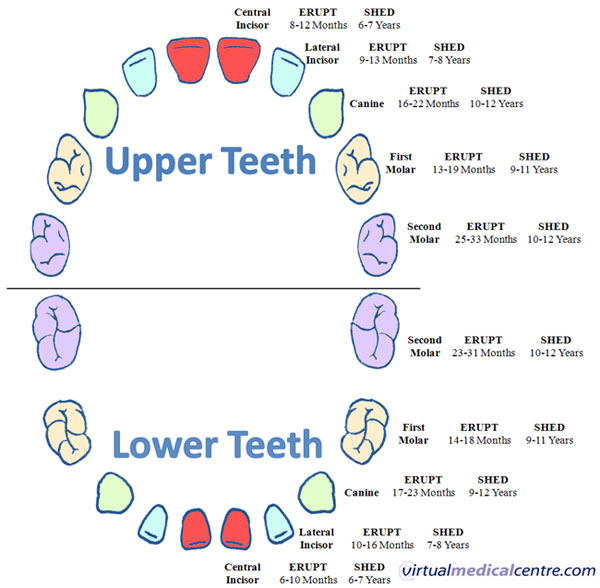 Problems during the eruption of deciduous teeth Delay in eruption of primary teeth has been noted in hypopituitarism, hypothyroidism, Down’s syndrome, cleidocranial dysostosis, Gardener’s syndrome, and cerebral palsy, to name a few. Diseases that affect the endocrine glands and are of genetic cause more commonly result in delayed eruption.

Eruption cysts are a type of fluid filled sac that forms on the top of a tooth that is coming through. The cysts are often blue, raised, able to be compressed and oval shaped. It may form during the period of eruption of the primary or adult teeth. More often than not, eruption cysts go away as the tooth comes through.

In the past, eruption cysts were often misdiagnosed as ‘dentigerous cysts,’ which is another type of cyst that must be managed differently as it does not resolve as the tooth comes through.

If there is no improvement after the tooth comes through, then it is possible that the lesion is not an eruption cyst, and another form of treatment should be considered.

Natal teeth (those which come through around the time of birth) usually occur in around 1 in 2,000 to 1 in 3,500 births. Most of the natal and neonatal teeth (those which are present at birth) are normal teeth that just come through more quickly than usual.  There is a chance that the natal or neonatal tooth is actually an extra tooth (supernumerary tooth). This is usually the cause in around 1-10%.

If the natal or neonatal tooth is an extra tooth, then it is usually removed by the dentist. Extraction is also best for very mobile teeth due to the risk of the tooth falling out and subsequent swallowing or inhalation.

Riga-Fedes syndrome, occurs in approximately 6-10% of cases of neonatal or natal teeth. It is, essentially, the ulceration and infant discomfort that occur when primary teeth come through. As there are difficulties with having teeth at this young age, Riga-Fedes syndrome can be managed by:

Get on top of your dental health

Signs and symptoms of teething

The history of teething Throughout history, teething has been held responsible for a wide variety of childhood illnesses. Sumerians believed teething and worm infestation were associated. Hindu writings, as well as work by Aristotle, Homer, Celsus, and others, describe associations between teething and illness.

By 1839, 5,016 deaths in England and Wales were supposedly attributed to teething. Teething was used to account for the following infant deaths in London:

The belief in lancing the gums was widely and firmly held by both the medical profession and the public, something that is now considered obsolete.

As recently as 1979, parents and physicians were identifying teething as a cause of presenting symptoms in children admitted to the hospital. The problems ranged from upper respiratory infection to bacterial meningitis, and it was found that most of these cases were easily attributed to another cause.

Good evidence now exists that teething is associated with, at most, minor and relatively infrequent symptoms. Most medical professionals now agree that teething does not cause life-threatening illness.

Teething appears to be linked with:

A slight fever, facial rash, sleep disturbance, and ear rubbing may all be associated with teething, however it must be stressed the link is likely to be small, if at all there is one.

It is thought that teething is the scapegoat for many other events occurring between about 6 and 24 months of age, after a relatively trouble-free first 6 months of life. These may include the sudden rise in respiratory, middle ear, and diarrhoeal infections at this age as well as specific infections such as herpes simplex virus (predominantly type 1).

Severe symptoms such as fever, diarrhoea, strong urine, and susceptibility to infections do not appear to be associated with teething; it is safe to say that serious and life-threatening problems are not linked to teething. 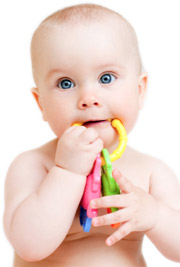 A wide range of teething rings are commercially available. Temporary pain relief is provided by the pressure produced by chewing the teething ring. This is best achieved when chilled first. It is important to note that teething rings should be attached to the infant’s clothing, and not tied around the neck, as strangulation could result.

Other home remedies include chewing breadsticks and oven-hardened bread, frozen breads, a variety of fresh and frozen fruit and vegetables, and providing infants with a pacifier for temporary pain relief.

Several of these remedies involve applying pressure to the painful area. You can also apply mild pressure with a clean finger (possibly with wet gauze) or a cold spoon. Excess saliva can run onto the infant’s skin. It should be wiped away regularly or a facial rash may develop.

Most parents prefer to avoid using drugs and medications during teething; however, a wide range of effective local (applied to the tooth) and systemic (affect the body systems) treatments are available when simple remedies do not provide relief. These remedies at best only last a few minutes, so their effectiveness is questionable, nonetheless they are commonly used.

Sugar-free paracetamol reduces pain and fever, and is the most common form of drug-based treatment.

Lignocaine hydrochloride is a local anaesthetic that is rapidly absorbed in the mouth, giving quick relief from pain, although temporarily. It is used commonly for dental procedures, and it should be applied cautiously in infants to prevent an overdose.

Choline salicylate is the active ingredient of several minor pain medications commercially sold for teething issues, and is similar to aspirin. Although Reye syndrome, (a disorder of the liver and nervous system) is related with the use of aspirin in children, it appears choline salicylate does not present a problem. However, many paediatricians and pharmacists now tell people to avoid choline salicylate preparations in teething for possible safety reasons.

What not to do

Long-held cultural beliefs about teething should be put to rest, and it is time to acknowledge that there is good evidence that teeth coming through are not associated with significant symptoms. Those children with symptoms that were historically thought to be related to teething e.g. diarrhoea, herpes simplex virus, and other severe infections should not be subjected to the treatment modalities of teething, and professional help should be sought instead.

Adding sugar, honey or jam to feeding bottles, or dipping a pacifier in honey or jam has absolutely no pain relieving effect, and will cause tooth decay. Repeated application of alcohol to the mucous membrane of an infant is ineffective and due to an infant’s small body weight, may lead to severe problems.