Labour is the process of passage of the foetus and placenta from the uterus, through the vagina, to be external to the mother. It is part of the process of parturition, which refers to labour, delivery and birth. Parturition requires the dilation of the cervical canal to accommodate for the passage of the foetus, as well as contractions of the uterine muscle wall that are strong enough to expel the foetus.

There are three distinct stages of labour:

The entire process of labour and vaginal birth takes an average of 13 hours in women giving birth for the first time, and 8 hours in women who have given birth before. However, the exact duration varies a great deal from one woman to another. 18 hours of first stage is considered ‘prolonged’, and 1.5-2 hours of second stage is considered ‘prolonged’.

Stage one lasts from the initiation of labour until there is full dilation of the cervix. The cervix will become thinner (a process known as effacement) and stretches (dilation) as the baby’s head will descend and “engage” with the pelvis. This process of contractions, thinning and stretching is usually painful for the mother. First stage is generally the longest stage. In a woman who is having her first baby, this first stage takes on average 8 hours. In a woman who has had previous children, this stage will be shorter, and takes on average 4 hours.

The first stage is divided into two parts: 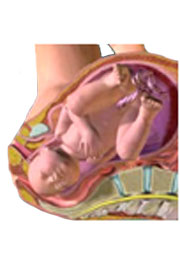 This is from the time of full dilatation of the cervix until the baby is delivered. During this stage there are two phases:

Once the baby is delivered, the umbilical cord will be clamped and cut by the midwife/doctor. The stump shrivels up in a few days to form the belly button. The baby is then free to be held by the mother.

Breastfeeding soon after delivery is often encouraged as this may assist with the third stage of delivery and is beneficial to the baby.

Stage 3 – Delivery of the placenta

After the placenta is expelled, continued contractions of the uterus constrict the uterine blood vessels. This prevents extensive blood loss. Most women will lose some blood during the delivery process – this is expected. When there are larger volumes of blood lost, a midwife or doctor may need to manage this (see Post Partum Haemorrhage).