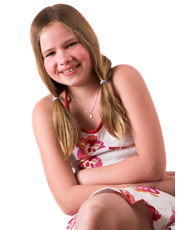 Nearly all the organ systems in the human body begin to grow and develop after birth. However, the reproductive system remains inactive for several years. While it is dormant, the brain secretes very small amounts of reproductive hormones (gonadotrophins), preventing any sexual development from occurring. When girls reach the age of about 9-10, a surge of reproductive hormones are secreted by the brain, activating the reproductive system to prepare it for adult function. This surge is generally referred to as the onset of puberty and leads to the beginning of adult sexual life. Two hormones crucial to normal reproductive function are luteinising hormone (LH) and follicle-stimulating hormone (FSH). The levels of these hormones increase gradually from the ages of 9-12 and then more sharply during the early teenage years.

Puberty generally marks the beginning of adolescence, but the two things are not identical. Adolescence itself can be defined as the period between the onset of sex steroid secretion until full adult height is reached. Puberty is considered to be the beginning years of adolescence, and is complete when girls experience their first menstrual period or viable sperm is present in the ejaculate for the first time in boys. In Western nations such as Australia, girls attain puberty at around age 12, and boys at around 13.

This is the first noticeable sign of puberty in females. The internal structures of the breast begin to develop under the influence of hormones including oestrogen and progesterone. Growth hormone and glucocorticoids then complete the development of the network of ducts within the breast, while fatty and fibrous tissue enlarge the breast. Breast development is generally completed at around the age of 20. However, minor changes occur with each menstrual cycle and the breasts change dramatically during pregnancy.

Hair begins to grow and proliferate around the pubic area and under the arms. Oil and sweat glands also form, especially in the underarm area. Androgens, which are a class of hormones that includes testosterone, are secreted by the ovaries, causing these changes. These androgrens also stimulate the sex drive in both males and females. Women secrete relatively little androgen compared to men.

The first menstrual period, also known as menarche, marks the end of puberty. The average age of menarche has declined over the past decade in Western nations and is now about 12 years of age. This is thought to be due to improved nutrition. Attaining menarche does not nesessarily mean that a girl is fertile as the first few menstrual cycles are not likely to result in the release of an egg (ovulation). Ovulation generally begins to occur regularly about a year after menarche.

Progesterone and oestrogen are important hormones in the development of adult reproductive function. Levels of both hormones increase significantly during puberty, resulting in many changes to the body.

Progesterone mainly affects the uterus (the womb) to prepare it for pregnancy during the second half of the menstrual cycle. It thickens the uterus lining in preparation for a fertilised egg to implant. If fertilisation does not occur, this lining breaks down and is discharged as a menstrual bleed.

The oestrogens stimulate most of the other changes associated with puberty.

One effect of oestrogen is to change the female sex organs from those of a child into those of an adult. It stimulates the growth of the ovaries, fallopian tubes, uterus and vagina. The external genitalia, including the labia minora and labia majora, also increase in size.

Oestrogens are also responsible for the development of the breasts. An extensive ductile system is developed and additional fat is deposited in the area. The ability to produce milk also comes about as a result of the influence of oestrogen.

The reabsorption of bone is inhibited by oestrogens. This results in bone growth, so that the female growth in height during puberty is rapid for several years. However, oestrogens also cause the bones to stop growing earlier than they do in males, leading to the growth of women ceasing several years earlier than the growth of men. Women are therefore generally shorter in stature.

Oestrogens increases the deposition of fatty tissue, so that women have a higher percentage of body fat than men. Fat is particularly deposited in the hips, thighs, buttocks and breasts. This produces the characteristic female “hourglass” figure. Skin is also thickened in females, although it remains thinner, softer and warmer than in males of the same age.

During the course of puberty and adolescence, young people begin to shift away from concrete thinking to the more adult abstract thinking. Concrete thinking occurs when objects have to represent “things” or “ideas” for problem-solving. In contrast, abstract thinking is the ability to use internal symbols or images to represent reality. Young people are therefore able to move from thinking literally to thinking hypothetically about the future, and to assess multiple outcomes when faced with a problem.

During the early stages of puberty, concrete thinking still dominates, but early moral concepts begin to appear. Sexual orientation may also develop at this stage.

Mid-puberty, abstract thinking begins to feature more prominently. Many young people at this stage still have a sense of “invincibility” akin to that during childhood. The law is still generally identified as a guide to what is right, and its morality is not questioned. Fervent ideology may also start to develop, for example in the form of religious or political views.

Late in puberty, there is the development of complex abstract thinking and the identification of differences between law and morality, leading to questioning of the law and authoritative figures. Personal identity is also further developed.

Precocious puberty can occur as a result of abnormalities of the central nervous system that disrupt gonadotrophin releasing hormone (GnRH) secretion, or it can be independent of GnRH secretion. The onset of puberty before the age of 8 generally defines precocious puberty in girls. It involves early physical changes of puberty, as well as accelerated linear growth and bone maturation. This can ultimately lead to a short adult stature because the bones stop growing early.

When there are no initial signs of secondary sexual development by the age of 13 years in girls, puberty is said to be delayed. Puberty can be delayed by a number of different factors, including inadequate nutrition, chronic illness, severe levels of stress and problems with interactions between the brain and the reproductive system.