Obesity is becoming a global problem. The majority of Australians are overweight, and 20% are obese. Professor Jeffrey Hamdorf talks about the problems caused by obesity and the possible treatments for obesity. 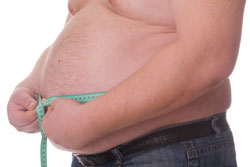 You would probably be aware that the health problems associated with excessive weight have been increasing in the Western world, particularly over the past two decades or so. The health problems we are talking about here include an increased risk of heart disease and high blood pressure (which can in turn cause stroke); also, there is a very high risk of developing diabetes and other problems with breathing such a sleep apnoea and asthma, and some digestive disorders as well. Overweight people have problems with mobility and they are at risk of developing diabetes affecting, especially, the weight bearing joints, like the ankles and knees. Fertility is affected, especially in women; this means that women which are overweight have a smaller chance of getting pregnant.

Obesity is regarded as morbid obesity when it reaches a point where there is a significant risk to health – and we can calculate and index for people. This is called the body mass index and it takes into account your weight and height. We are talking about morbid obesity, but this relates to people who have significant illnesses related to their weight, or who are in the order of 40 kilograms overweight. Obesity is a chronic illness and it does require significant treatment.

Now the reasons for obesity are many – it’s not simply a result of over eating. Once a patient becomes morbidly obese, a change in lifestyle – such a calorie-controlled diet – and increasing exercise is really important, but these have a limited effect on morbid obesity. Patients just can’t seem to lose enough weight using a diet approach alone to correct their health problems.

The principals for those that are overweight, but perhaps not obese, include a supervised diet and exercise program and this is entirely appropriate and there are many of these programs around. Unfortunately, these are not entirely suitable for obese patients, and particularly morbidly obese patients, because in over 90% of cases the weight lost in supervised programs is resumed within a couple of years. Once a patient’s weight is classified in the obese category then diet and lifestyle changes are not enough and medications may need to be added. There are two major medications in this area; they include Reductil, or Sebutramine, and Xenical, or Orlistat. These medications have to be offered under medical supervision.

Now another method which is successful in obese patients is cognitive behavioural therapy. This is group therapy supervised by a clinical psychologist and it looks at the reasons behind the peoples’ troublesome eating habits. This is available in Australia through general practitioner initiated care plans, so a GP needs to organise it.

For those patients that have morbid obesity (those people who are more than 40 kg overweight) or that have health problems created or made worse by their weight, then surgery is the mainstay treatment. Surgical procedures are based on reducing the amount of food one is able to eat before fullness occurs, or – and these are called reductive procedures – an old fashioned gastric stapling and more recently, a laparoscopic adjustable band or lap band. With the laparoscopic banding, a silicone band is placed around the top part of the stomach creating a small upper pouch. The band can be made tighter or looser depending on the weight loss, and this operation is one that is almost always done using the keyhole technique. The band can be adjusted and can be reversed if necessary. This is a method that helps people keep a sensible calorie-controlled diet and if it is reversed, more patients will resume their weight rather quickly. Another method which is gaining some popularity is called a sleeve or tube gastrectomy where a part of the stomach is surgically removed so that one is able to eat less. None of these methods tell a patient what to eat so we need to be fairly conscious about diet and for all surgical care of weight loss, a team approach is necessary with advice for the patient coming from a physician as well as a surgeon, a dietician, and sometimes a psychiatrist or a psychologist as well. Some teams use an exercise physiologist or a specialist physiotherapist to help design supervised exercise programs according to patients’ needs.

More extensive surgery includes a procedure, which is particularly popular in the United States, called a Roux-en-Y gastric bypass. In this operation, the stomach is cut at the top portion leaving a small pouch and this is then connected to the intestine lower down; only small amounts of food may be eaten and these small amounts of food may take some time before they get to the digestive part of the bowel. That means that if the patient eats the wrong sorts of foods then they would experience significant indigestion symptoms. In addition to this, they will require daily nutritional supplements such as vitamins and minerals. Surgery for weight loss is very successful in a patient who is well prepared and well motivated to succeed, and most patients can expect to lose up to 60% of their excess weight. We find that this helps to correct the diabetes very quickly, patients sleep better and are much more mobile, improving their quality of life. Surgery is an important part in weight control and it should only be considered where a multidisciplinary team is used to help supervise patient care.