Introduction to meat and meat products

Meat and meat products are rich and concentrated sources of nutrients including fats, proteins, vitamin B12, zinc and iron.

Meat is categorised into red meat and white meat. Meat from any source is of similar nutritional value, whether it is white or red. The intensity of colour in meat depends on the amount of myoglobin it contains. It is incorrect to assume that white meat from birds is superior to red meat, or vice versa. Offal meat (i.e. internal organs such as liver and kidney), however, tends to have a higher nutritional value, and red meat is known to contain a rich source of iron.

The distinguishing element among the various sources of meat appears to be the fat content. Some scientists consider red meat (e.g. beef, lamb and goat) to be less healthy because it has a relatively higher fat content compared to white meat. Saturated fat in meat may predispose people to cardiovascular disease.

There are many reasons for people to eliminate meat and meat products from their diet. Some of these reasons may include health concerns, religion, cultural background, income and accessibility of meat.

Red or dark meat is mainly made up of muscles with slow fibres. These muscles are used for extended periods of activity, such as standing or walking, and need a steady energy source. Red meat refers to the muscle meat from cattle, sheep, goat and kangaroo and essentially provides considerable amounts of zinc and vitamin B12.

The pigment that is primarily responsible for the red colour of meat is myoglobin, a protein that can bind and store oxygen in cells. The amount of myoglobin in meat varies according to species, age of animal, amount of exercise, stress, condition of storage, exposure to oxygen, heat and processing.

Tissues and organs that require more oxygen for their functions have more myoglobin, and therefore are redder in colour. Beef is shown to contain more myoglobin in its tissue than lamb.

Myoglobin levels also vary depending on muscle use. More active parts of an animal require more oxygen and will therefore have more myoglobin and consequently, be redder or darker in colour. For example, chicken legs are darker than chicken breasts because their legs are more active. White meat is made up of muscles with fast fibres. Fast fibre muscles are used for quick bursts of activity, such as fleeing from danger. These muscles source their energy from glycogen, which is also stored in the muscles. White meat is a valuable source of iron and zinc, however, the mineral content per unit weight of white meat is about half the mineral content of red meat per unit weight. Similarly, vitamin B12 content is less in white meat.

Myoglobin content is low in white meat. This explains why chicken breast and veal are slightly pink or white. The colour of fish meat is white because it lives in water and does not need to support its own body weight, and therefore has no myoglobin in its muscles.

Protein is the fundamental structural and functional element within every cell, and is made up of 20 common amino acids. There are eight amino acids which are not produced in the body and must be supplied by food. These are classified as essential amino acids.

The majority of the foods we eat contribute some amounts of protein to our diet. Animal products have a higher protein content than fruits, vegetables and breads. Muscle meat is a good source of protein. Meat is rich in essential amino acids, particularly sulphur amino acids.White meat contains an equivalent amount of protein to red meat.

Protein from meats, fish and poultry are more easily digested than protein from beans and wholewheat.

Fat is distributed throughout meat. The fat content of meat varies depending on animal breed, age, amount of exercise and diet. Lean red meat provides 2-5g of fat per 100g of dietary fat. It has almost equal amounts of saturated and monounsaturated fats, and a small amount of polyunsaturated fat. 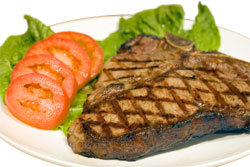 Iron deficiency is common in Australia. Pregnant women, or those of childbearing age, require more iron than other people. Vegetarians and semi-vegetarians have a higher risk of developing an iron deficiency, as iron obtained from plants has a lower bioavailability.The human body can absorb about 15% of iron from plants (non-haem iron), and about 25% of iron from meat (haem iron). Eating meat in a mixed meal can cause a two-fold increase in the absorption of non-haem iron.

Red meat (e.g. beef and lamb) is the best source of iron. Chicken contains moderate amounts of iron, while fish has the least amount.

Iron deficiency is progressive. Anaemia develops at its final stage. When iron stores in the body are depleted, the amount of iron circulating in the blood is decreased, causing a fall in red blood cell production. Mild iron-deficiency anaemia leads to reduced work capacity, slower response to exercise, impaired immune function, and changes in mood and cognitive performance. In children, iron-deficiency anaemia is associated with psychomotor development. In pregnancy, iron-deficiency anaemia causes prematurity, low birth weight and increased perinatal mortality.

Zinc is a trace mineral that can be found in almost every cell in the body. Zinc is essential to the human body because it stimulates enzyme activities, provides a healthy immune system, is used for wound healing, sustains senses of smell and taste, and is used for DNA synthesis. Zinc is also important for normal growth and development during pregnancy, childhood and adolescence.

Meat is a major source of readily available zinc. The liver and kidney are richer sources than muscle meat, and pig liver is richer in zinc than sheep or beef liver. Zinc from animal sources (including eggs) is better absorbed than zinc from plant foods (e.g. wholemeal bread).

Vitamin B1 (thiamin) occurs naturally in duck, oyster, and other meats. A deficiency of vitamin B1 can cause beri-beri and Wernicke-Korsakoff syndrome, which result in neurological and cardiovascular dysfunction. These two syndromes are normally seen in alcoholics, and seldom seen in vegans. Vegans can derive their vitamin B1 from plant sources (e.g. nuts, pulses, oatmeal, fortified breakfast cereals, etc).

Offal is the best source of vitamin B2 (riboflavin). Riboflavin aids the metabolism of carbohydrates, fats, and proteins. It plays an important role in reproduction, and in the growth and repair of joints, skin, hair, and nails. It also enhances the immune system’s ability to fight disease.

Vitamin B3 (niacin) is found in foods that are high in protein (e.g. liver, kidney, poultry and fish). Vitamin B3 helps to remove toxic and harmful chemicals from the body. It helps produce various sex and stress-related hormones in the body. Vitamin B3 helps improve circulation and reduce blood cholesterol levels.

Vitamin B12 (Cobalamin) is necessary for cell division and blood formation.Vitamin B12 is synthesised by microorganisms and is found in bacterially fermented foods, meat, and offal from ruminant animals.Offal, particularly liver, contains more vitamin B12 as this is where the vitamin is stored. Occasionally, cobalamin is found in soil and water because they are contaminated with microbes that produce vitamin B12. This is how plants derive an inactive form of this vitamin.Shellfish, fish and meat are also rich in vitamin B12.

Health and nutritional benefits of meat

A study conducted in Perth, Australia showed that the per capita consumption of red meat had fallen steadily, while white meat consumption rose. One of the factors that contributed to this pattern was rising concerns about fat, cholesterol, nutritional value, calories, fibre, waste and artificial additives. Lean meat is rapidly becoming the preferred choice, but it is often more expensive.

Meat definitely has great nutritional value but consumers must be reminded that too much of a good thing can be harmful. Human population studies show that red and processed meats are associated with an increased risk of colorectal cancer, but white meat is not. The evidence is not yet conclusive, but consuming a lot of preserved meat probably increases the risk of colorectal cancer. 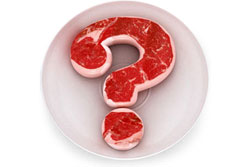 The NHMRC Dietary Guidelines for Australians on meat consumption are:

The NHMRC Dietary Guidelines for Australians recommends that lean red meat be consumed 3-4 times a week, and fish 1-2 meals per week.