Male breast cancer is a rare but important disease. Many people do not realise that men, as well as women, have breast tissue. In women, the breast is composed mainly of fatty tissue, milk glands and a series of ducts connecting the glands to the nipple. In men, only a small amount of breast tissue is present. This is mainly made up of fat, with a few ducts and some connective tissue. However, this small amount of breast tissue can occasionally undergo malignant (cancerous) change, producing breast cancer. Breast cancer in men is essentially the same disease as breast cancer in women. A few important differences do exist, and these are discussed below.

Because male breasts have such a small amount of breast tissue, cancer cells can quickly spread and invade surrounding structures, such as the skin or chest wall. In addition, because male breast cancer is so rare, it may be diagnosed later, when it is already locally advanced. In approximately half of cases, the lymph nodes of the axilla (armpit) are already involved at the time of diagnosis. Metastases (distant spread of cancer via the blood stream) to the lungs, brain, bone and liver are common.

The commonest symptom of breast carcinoma is a small, painless lump in the breast. It is most often found near or under the nipple. Sometimes, a discharge from the nipple is noticed first. Other patients notice a change in the shape or appearance of the nipple or breast, experience pain in the breast, or find swollen lymph nodes in the axilla (armpit). Any changes to the size, shape or feel of the breasts should be investigated. Some common symptoms of male breast cancer are shown in the diagram below. 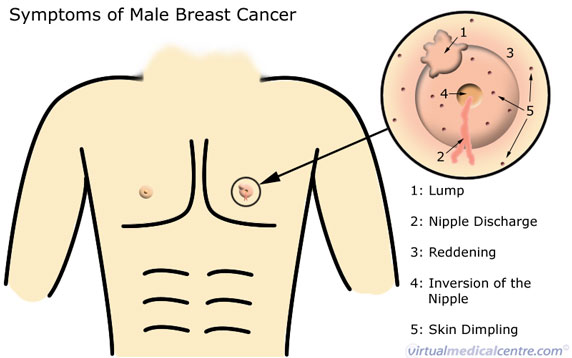 The approach to investigation of any male breast change or symptom is the same as for women; that is, the ‘triple test’ approach. This involves the following:

Following a diagnosis of breast cancer, blood tests including Full Blood Count and Liver Function Tests may be used to assess the possibility that the cancer may have spread to the liver or bone marrow. Other imaging tests, including chest x-rays, bone scan, abdominal CT or liver ultrasound may also be used if symptoms suggest that the cancer has spread.

The prognosis (outcome) of male breast cancer depends strongly on the following factors:

The general belief that male breast cancers are worse than female cancers probably stems from the fact that male breast cancer often presents at a later stage due to poor detection. However, studies have concluded that clinical outcomes for breast cancer in men are similar to those for women when they are matched for age, treatment, and stage of cancer. Overall, five-year survival rates for men with breast cancer range from 14-78%, depending on how advanced the tumour is at diagnosis.

Most patients with breast cancer will receive a variety of treatments, which may include one or more of surgery, radiotherapy, chemotherapy and/or hormone therapies.
Surgery
If surgery is possible, male breast cancer is usually treated with a procedure called a modified radical mastectomy. This involves removal of all the breast tissue, including the nipple and surrounding areola, on the affected side. Occasionally part of the muscle under the breast will also have to be removed. The lymph nodes in the axilla (armpit) are also removed in a procedure called an ‘axillary dissection’. Sometimes, if previous tests have suggested that the cancer is at a very early stage, only one or two of the axillary lymph nodes will be removed and examined in a procedure called ‘sentinel node biopsy’. The removed lymph nodes are carefully examined for any evidence of cancer cells. If no evidence is found, the remaining lymph nodes can be left in place. Male breast cancer patients are not usually suitable for the type of breast conserving surgery sometimes used in female patients. This is because male breast cancer often involves the nipple, areola or skin, and because the amount of remaining breast tissue would be too little to conserve.
Radiotherapy
Radiotherapy may sometimes be recommended after surgery for patients with breast cancer. The aim of this treatment is to kill any remaining cancer cells which were not surgically removed, reducing the likelihood that cancer will recur. Radiotherapy usually begins 3-6 weeks after mastectomy, and lasts for 5-6 weeks. Because male breast cancer is so rare, the evidence for the use of radiotherapy in treating these cancers is not clear. Overall, however, it is thought that radiotherapy does reduce the rate of local recurrence.
Chemotherapy
Chemotherapy uses medications to target and kill any remaining breast cancer cells. Like radiotherapy, the evidence for using chemotherapy in the treatment of male breast cancer is not good. For some patients with larger cancers, or cancers that have spread, it may improve outcomes.
Hormone therapies

The majority of male breast cancers express hormone receptors (such as oestrogen receptors) on the cancer cells. These hormone receptors allow the cells to receive signals from circulating hormones like oestrogen, stimulating their growth. By targeting these hormone receptors with drugs like tamoxifen, it is possible to block the receptors and decrease the rate of cancer growth. Other drugs known as ‘aromatases’ have a similar effect by reducing the amount of oestrogen in the body. Because hormone therapies are so effective, they are recommended for use in most patients who have oestrogen-receptor positive tumours. Hormone therapies do have a number of side effects, including headaches, nausea, hot flushes, reduced libido (sex drive), or impotence. They may also increase your risk of developing blood clots such as deep vein thrombosis.
Click the links below to see for information on other breast cancers: