Introduction to labour and birthing positions

The best position for women to adopt during labour and birth varies depending on which stage of labour she is in. There are three stages of labour. The first stage of labour is from the beginning of the contractions that cause the cervix (the opening of the womb) to open (dilate), until the cervix is fully dilated. The second stage is when the cervix is fully dilated and the woman can start pushing the baby out. The third stage is after the baby has been born, and the placenta is delivered.

There are many options for women when deciding which position is best during the first stage of their labour. Research attempting to compare positions in terms of outcomes for mothers and babies has been limited. Women instinctively use a variety of positions and movements to cope with the pain of the first stage of labour. These include walking, leaning forward, gentle lunging, four-point kneeling (kneeling on hands and feet), rocking and swaying. The act of changing positions may give women a sense of control by providing something active they can do to relieve the sense of feeling overwhelmed during labour. The position a woman is in during first stage does not change the:

Women who go through the first stage in an upright position are less likely to require an epidural. Some studies have found that for women without epidurals, walking around or being seated upright (e.g. on a birthing ball) may shorten the first stage of labour by approximately one hour, although these findings have not been consistent. The shortened labour is likely due to the increased pressure of the baby’s head on the cervix, causing it to dilate.
Spending at least 30 minutes during labour in four-point kneeling, possibly with pillows under the knees and hands, has been found to reduce persistent back pain during labour. However, this position does not help the baby to rotate from a posterior position (where the baby’s face is toward the front of a woman’s body when it is delivered, which can be more difficult) to an anterior position (where the baby’s face is toward the back of the woman’s body when it is delivered), or affect the need for caesarean delivery, rates of perineal tears, Apgar scores (which measure the wellbeing of the baby when it is born), or length of labour. Nevertheless, most women find it an acceptable position for labouring.
Moving around, sitting in a chair or on a ball, showering and baths may also reduce discomfort during contractions. Being seated in an upright position during cervical dilation from 6 to 8 centimetres results in less back pain than lying on the back. Walking around has not been found to alter the need for augmentation, use of painkillers, or requirement for assisted or caesarean delivery.
The appropriateness of such activities varies depending on factors such as the need to monitor the mother and baby, personal preference, and epidural anaesthesia.As there is no significant effect of posture on labour progress, women will be encouraged to assume the position in which they are most comfortable, and as long as there are no complications, women should be free to walk around if they so wish.
Once labour is well established, the strength of contractions may be such that moving around becomes more difficult. The midwife and birth attendant will help the woman find a position in which she feels comfortable. The woman should be supported by attendants, pillows, furniture and the like, in order to allow her to relax as much as possible. Bent knees allow pelvic rocking to take place, and reduce strain on the joints, while legs wide apart increase the base of support, and allow an ‘open’ pelvic position. Side-lying, supine (lying on the back) or semi-reclining positions are often preferred by medical staff, as it is more convenient for the staff and allows easier monitoring of the progression of labour and the status of the woman and baby. However, some centres have portable monitors that allow the woman to move around. Attachments such as epidurals and IV fluid therapy may also limit movement.
When a pregnant woman is lying on her back, the weight of the baby and uterus presses on the large blood vessels in the abdomen, which may reduce the blood supply to the baby and uterus, and decrease the strength of the contractions. Putting a wedge under one hip can help reduce this effect. Little is known about the effect of upright versus lying down positions during the first stage on outcomes for babies or satisfaction for mothers. In general, the woman should do whatever makes her feel most comfortable during the first stage, although she will need to take into account advice from her doctor or midwife regarding her and her child’s wellbeing, and the need for close monitoring.
Although some women with epidural anaesthesia are able to walk around safely, if a woman has an epidural or spinal anaesthetic that has resulted in muscle weakness or problems with blood pressure, she will not be able to move around until it wears off. If the epidural has partly blocked feeling, but not movement, the woman may still be able to remain mobile and upright.
Lying flat on the back (supine) will reduce a pregnant woman’s blood supply to her baby, and studies have found that less oxygen reaches the baby as a result. Side-lying or a half-lying positioning with pillows or a wedge under one hip will improve blood supply to the baby.
During the transition phase, standing or sitting in the shower with water directed towards the back or the abdomen may help with pain control. Two-point or four-point kneeling, with the woman well supported on a beanbag or pillows, may also assist with this stage. If a premature urge to push occurs, the knee–chest position has been suggested. This is where the woman kneels with her forehead and arms on the floor and her bottom in the air, in order to reduce pressure on her cervix.

Water immersion
Being immersed in water such as a bath or birth pool during the first stage of labour significantly reduces perception of pain and use of epidural analgesia. It does not have any negative effects on length of labour, operative delivery rates, or wellbeing of the baby.

Common options for positions to try during the first stage of labour include:
Upright positions There are a wide variety of positions that may be used by a woman during labour and delivery. No one position for the second stage of labour is superior to others in terms of outcomes for the mother and baby.

History of birthing positions
In traditional societies, where the influence of ‘Western medicine’ is limited, women in labour tend to move around and change positions freely, and avoid assuming lying down positions. They tend to have support in an upright position through devices such as slings, birthing stools, rope and attendants. They are encouraged to rock or circle their pelvis, or shift weight between their feet. If required, they may briefly spend time in a side-lying position. Prior to the 1700s, women in Western countries also tended to deliver in upright positions. Over the past 300 years or so, women in Western society have been encouraged to deliver in lying down positions, largely for the convenience of the doctor or midwife delivering the baby.

Studies comparing different birth positions are not of good quality. However, it has been found that for women without epidurals, delivering in an upright position:

A study carried out in a country where women commonly use a deep squatting position for work, rest and toileting found no difference in use of episiotomies. However, there was a greater occurrence of perineal tears and use of instrumental delivery when women delivered in the lithotomy position (lying on the back with the legs in stirrups) versus in squatting. There was no difference in the health of the babies between the groups. Although the squatting position may assist delivery, Western women tend to be unaccustomed to maintaining a deep squatting position, so only a very small proportion of women are able to maintain this position for any meaningful length of time, or for delivery itself.
A large study showed the best position for avoiding perineal tears is in the lateral position. This is when the woman is lying on her side with the top leg supported by an attendant (66.6% avoided tears). Squatting was the position most commonly associated with tears (42% avoided tears). Birthing chairs have been used in several studies, and have been found to have no advantage in terms of length of the second stage, need for instrumental delivery or the degree of perineal trauma; however, they are associated with increased blood loss from the mother.

Influences on choice of position 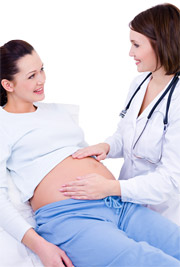 A study examining the influences on women’s use of birthing positions, and the labour experiences of women in relation to the birthing position they used, found that the most important factor influencing choice of birthing positions was advice given by midwives, even more so than the woman’s personal preference. As long as there are no medical concerns about the mother or baby, women benefit from making their own decisions about which position to give birth in.
There is a large range of choices of position and experience of pain in relation to position type. Women are most familiar with the supine position (lying on their backs), regardless of their ethnic background, which emphasises the importance of women learning about different positions during pregnancy and labour in order to increase their range of choices. The best place for a woman to learn about different options for labour is from her midwife or obstetrician, who will have suggestions and preferences that will help women prepare before birth. A Dutch study found that highly educated and older women were more likely to use birthing positions other than supine (lying on their back). Being able to choose her own birthing position increases a woman’s sense of control over the experience, and perception of the birth.
In all positions, the chin should be tucked in and the back rounded in order to maximise the efficiency of pushing. The midwife or obstetrician may encourage the woman to change position during the second stage, as this can help prevent injuries caused by long periods of pushing down in the one posture. There is limited information about the effect of position on outcomes for mothers and babies when the mother has an epidural.
If there is an increased risk of complications with a delivery (multiple births, large baby, etc), it may be most appropriate for delivery to take place in the lithotomy position, which is where the woman is lying on her back with her legs raised in stirrups, so that the attendant can easily see the perineum and access it if required. Otherwise, the mother may deliver the baby in almost any position she finds comfortable. In general, positions where the legs are wide apart and the hips are flexed maximise the width of the pelvis and assist passage of the baby. When delivery is very rapid, adopting a gravity-neutral position (four-point kneeling, sidelining) may help slow the stretch of the perineum and reduce the risk of tears.