Idiopathic subglottic stenosis (ISS) is narrowing of the upper airway caused by inflammation and scar tissue, due to an unknown cause.

Idiopathic means that something has an unknown cause. Subglottic refers to the area of the airway that is narrowed (under the vocal cords, or ‘glottis’). Stenosis means a narrowing. 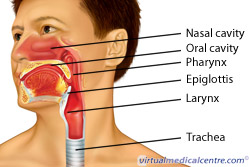 Many things can cause the airway to narrow. ISS will not be diagnosed if another cause is found for the narrowed airway (as diagnosis of ISS requires the narrowing to be from an unknown cause). Known causes of narrowed airway include: ISS is a rare condition. Around 5% of cases of upper airway narrowing (subglottic stenosis) are due to an unknown cause (Idiopathic). ISS occurs almost exclusively in women, with only a small number of cases reported in men. It usually occurs between 30-50 years of age,but has been known to occur in a population ranging from childrento individuals in their eighties.

The cause of ISS is unknown. It is unclear why it almost always affects women, and although it has been suggested that hormones are involved, this has not been proven.

It has been suggested that Gastro-oesophageal reflux disease both causes ISS, and makes it worse, though again this has not been proven.

A recent theory is that a severe coughing episode causes microscopic trauma and scarring in the trachea (windpipe), which causes it to narrow.

It is not clear how ISS progresses. Most authors believe it gradually gets worse over time. Symptoms of ISS, such as shortness of breath when exercising, may get worse over months or years and develop into shortness of breath at rest, noisy breathing and chronic cough. ISS commonly reoccurs after treatment, especially non surgical treatment. Due to the slow progression of symptoms, people with ISS are often misdiagnosed as having asthma and treated for that instead. 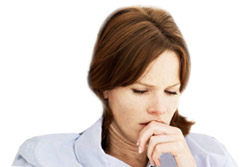 The most common symptom people with ISS experience is shortness of breath, particularly with exercise. As the airway becomes narrower, shortness of breath may occur at rest. ISS may also cause noisy breathing, wheezing and cough. Uncommon symptoms include cracking voice, inability to clear phlegm, tiredness and coughing blood. Occasionally, ISS will be detected by coincidence in people with no symptoms when they are having diagnostic tests for other reasons. People with ISS often have symptoms for some time before they see a doctor, with the average time between symptoms starting and seeing the doctor being four years. People should see their doctor if they are experiencing increased shortness of breath, noising breathing, wheezing or a prolonged cough.

These symptoms may be caused by other conditions (such as asthma or COPD) more commonly than they are caused by ISS. A clear description of when symptoms occur, how long they have lasted for, and what makes symptoms better or worse will be helpful to the doctor in making a diagnosis. People who experience serious symptoms such as coughing blood and severe shortness of breath should seek immediate medical attention.

People with ISS tend to be otherwise healthy. For this reason and due to the gradual onset of symptoms, it is not uncommon for ISS to be initially diagnosed and managed as asthma. There is usually little for a doctor to see upon clinical examination, although if stenosis is severe they may detect noisy breathing. ISS can only be diagnosed if other causes are ruled out. Thorough investigation is required to rule out other causes of stenosis.

Firstly, tests to rule out other causes are carried out, including:

Once these tests have been carried out, then a laryngo-tracheo-bronchoscopy (a form of endoscopy) may be carried out. This is where the doctor looks down the throat into the lungs with a tiny camera under local anaesthetic, usually with some sedation. This test is used to determine how large the area of narrowing is, how the vocal cords are moving, and the state of the airway. During the endoscopy, biopsy specimens from the area of narrowing may be taken. Digital photography may also be carried out to measure how severe the stenosis is.

People with ISS are thought to do better with treatment if the area of scar tissue in their windpipe is short (less than 1cm) and the scar tissue is soft. Several treatment options are available for management of ISS. These range from short term, conservative therapies, to surgical procedures. The best management of ISS remains controversial and no single method has been proven to be more effective than others. The options for treatment of ISS are detailed below.

If symptoms are absent or mild, so that the ISS does not affect quality of life or limit function, the most appropriate course of action may be to monitor the condition.

If a patient has symptoms of reflux, some doctors suggest anti-reflux medication should be started and the resulting improvement in symptoms monitored over a period of 3 months before considering a surgical procedure.This approach is controversial, as not all doctors believe treating reflux will improve ISS;

Steroid injections into the area of narrowing have been used in the past to prevent stenosis reoccurring following surgery. There has been no clear evidence to support this practice, so it has been abandoned. 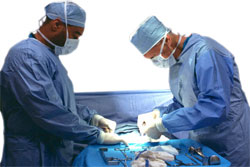 The narrowed area may be widened using balloons or tubes, then a stent may be put in place to splint the airway open. This is a fairly safe procedure, but the narrowing tends to reoccur afterwards, so further procedures are necessary.

Laser may be used to cut and widen the narrowed airway. This is done using endoscopy. It may be used with or without mitomycin-C. Around 60% of patients require a further procedure after this technique, with the average length between procedures being 9 months;

Open surgery may be used to cut out the affected part of the airway and rebuild it (laryngotracheal resection and reconstruction). This treatment is successful in restoring the airway whilst preserving voice quality in over 90% of patients. Reconstructive procedures may involve putting extra cartilage into the airway to widen the narrow area (cartilage grafts) or removal of the narrowed area, then reattaching the two ends (segmental resection). Due to the success of these reconstructive procedures, it has been suggested that these may be a suitable initial treatment option for ISS.However, surgery on the airway has greater risks than other procedures, so some doctors think it is better to use it if other treatments fail. Surgery is most helpful if the scarred, narrowed area is long and complex, as this is more difficult to fix with other treatments;

Tracheostomy, where a hole is cut in the front of the neck to create an opening into the windpipe, is now rarely required. Tracheostomies may increase the area of damaged windpipe (trachea), which can complicate eventual repair.