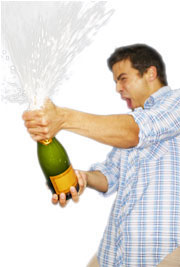 In the long term, binge drinking is also associated with an increased risk of numerous health conditions, and therefore has significant health, economic and emotional costs. Preventing alcohol intoxication on New Year’s Eve is therefore important for an individual’s health and for the health of loved ones. So this New Year, find out how to consume alcohol safely and still have a good night!

What is healthy alcohol consumption?

How much alcohol is consumed on New Year’s Eve?

No studies have been conducted about alcohol consumption on New Year’s Eve, although it is widely perceived as a night of festivities, involving large public gatherings and often excessive alcohol consumption. However, there is evidence that alcohol consumption increases in the festive season. For example, a study conducted in Spain reported increased alcohol and substance abuse at work Christmas parties compared to other times of the year. A study from Finland reported increased alcohol sales (and an increased incidence of fatal alcohol poisonings) on weekends and at times of celebration such as Christmas and May Day.

Alcohol intoxication carries numerous short and long term health consequences. In the long term these include:

In the short term alcohol intoxication increases the risk of:

In order to avoid consuming excessive amounts of alcohol this New Year’s Eve, why not try: