Grains, also called cereal or cereal grains, are the seeds of grasses (gramineae). A typical grain consists of the testa, the aleuronic layer, the embryo and the endosperm. The embryo is the living part of the grain, and is very rich in nutrients. Most nutrients (e.g. protein, vitamins and minerals) are concentrated in the aleuronic layer, whilst the endosperm consists mainly of starch.

With the advent of agriculture in the early history of human civilisation, grain consumption became prominent, especially in developing countries. Grains constitute a major source of energy in most households today, and occupy the base of food pyramids. Examples of grains are wheat, maize, rice, barley oats, millet and sorghum.

Grains and grain products are important sources of energy, carbohydrate, protein and fibre. 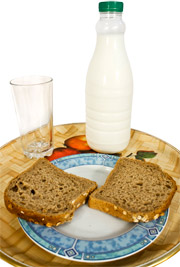 With the exception of calcium and sodium, grains provide good amounts of minerals needed for adequate nutrition. Since the typical Western diet is high in sodium, the low sodium content of grains is desirable. The low calcium content of grains does not appear to be a problem because most people in developed countries consume a mixed diet rich in calcium. It is however advisable for people living in developed countries to obtain calcium from a wider variety of sources, such as in dairy and some vegetables.

Ideally, calcium and phosphorus occur in the ratio of 1:1. However, grains have a low calcium/phosphorus ratio, which can negatively impact bone growth and metabolism. This is because consumption of an excess of dietary phosphorus when calcium intake is inadequate or low is reported to result in secondary hyperparathyroidism and progressive bone loss.

The high phytate content of whole grain grains may reduce the availability of calcium for absorption because the phytate forms insoluble complexes with calcium. The combined effect of low calcium content, a low Ca/P ratio, and low bioavailability of calcium via high phytate content may pose problems for healthy bone development in populations that use grains as a staple food. It has in fact been reported that in populations where grains provide the major source of calories, osteomalacia, rickets and osteoporosis are common, even when there is sufficient sunshine to prevent vitamin D deficiency.

Some studies of zinc absorption in rats and humans  have clearly demonstrated that consumption of phytate contained in whole grain grains (for example, wheat, rye, barley, oats) inhibits zinc absorption. The bioavailability of zinc from meat is four times greater than that from grains, and it implies that total dependence on grain- and plant-based diets (for example, vegetarian diets) may lead to impaired zinc metabolism in developed countries including Australia.

Grain protein is usually incomplete as it lacks some amino acids. In particular, lysine is limited in grains that form the basis for many diets. Furthermore, the essential amino acid, threonine, tends to be lower in grain-based proteins compared to animal protein sources.

Whole grain foods such as wheat, rice, oats, and barley are relatively low in energy density and are reported to help maintain energy balance.

What effect does processing have on grains? 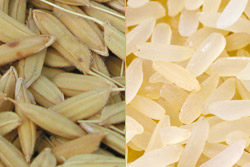 Grains are usually processed to:

Processing can make it easier for nutrients from grains to be digested or for nutrients to be added (fortification). There are a number of factors that determine the quality of grains and pulses for human consumption. For example, milling affects the nutritional value of grains in two ways:

Before grains are consumed, they must undergo some form of processing. The methods of processing grains (e.g. milling) reduces the nutritional value of grains. Generally, the final nutrient content of a grain will depend on the extent to which the outer layers are removed during processing (extraction rate). Removal of these outer layers implies loss of fibre, vitamins and minerals. Highly milled grains such as white maize flour, polished rice and white wheat flour are therefore of less nutritive value because they have lost most of the germ and outer layers and with them most of the B vitamins and some of the protein and minerals.

Can grains be bad for nutrition?

Grains constitute a biologically novel food for mankind, but questions remain unanswered as to whether they are particularly suitable for the genetic constitution of humans. It has been realised since the early 1950s (with the discovery of wheat gluten as the causative agent in coeliac disease) that grain peptides interact with and induce change in human physiology, and therefore elicit disease and dysfunction. Grains contain a variety of secondary metabolites which tend to be either toxic or anti-nutritional.

Alkylresorcinols are phenolic compounds which are reported to be in the highest amounts in rye (97 mg/100 g), in high amounts in wheat (67 mg/100 g) and in lower amounts in other grains such as oats, barley, millet and corn.

The traditional role of these compounds is to provide resistance from pathogenic organisms during dormancy and germination. Though alkylresorcinols pose problems in animal feeding, their relevance in human nutrition is unclear. In particular, giving large amounts of rye to cattle, sheep, horses, pigs and poultry has been shown to cause slower growth than feeding of other grains.

The acute effects of alpha-amylase inhibitors therefore appear to have therapeutic benefit in patients suffering from diabetes mellitus, obesity and other diseases of insulin resistance, though chronic administration in animal models has been shown to induce deleterious histological changes to the pancreas and pancreatic hypertrophy. In view of the potential adverse effects these dietary anti-nutrients can have on human health, it is advisable to be cautious with alpha-amylase inhibitors in human foodstuffs.

There are no known dietary effects of chronic low level exposure to plant protease inhibitors in humans. If anything, there is some evidence to suggest they may have beneficial, anti-neoplastic effects.

Lectins are proteins that have a strong affinity for carbohydrate-containing molecules, particularly toward the sugar component. They have the ability to bind to specific glycoconjugate receptors on the surface of the erythrocyte cell membranes and are recognised as the major anti-nutrient of food. Lectins, especially wheat germ agglutinin, (WGA) bind surface glycans on gut brush border epithelial cells, which leads to impairment in digestive/absorptive activities, stimulates shifts in bacterial flora and modulates the immune state of the gut.

Lectin activity has been demonstrated in wheat, rye, barley, oats, corn, and rice but not in sorghum or millet.

How are grains good for your health? 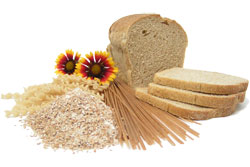 Despite the nutritional deficiencies associated with grains as a food group and the potential health risks their over-consumption may pose, grains offer health benefits when included in moderate amounts in the diets of most people. There is evidence to suggest that regular consumption of a diet rich in grains, in particular whole grains, may have a role in the prevention of chronic diseases. Consumption of high-fibre foods is associated with a lower risk of several chronic diseases, including diabetes, cardiovascular disease, and diverticulitis.

There is no strong evidence for an association between fibre consumption and cancer; therefore, it is highly recommended that high-fibre foods, such as legumes and whole grain breads, grains, rice, and pasta, be consumed.

Grains lack a number of nutrients which are essential for human health and well-being. Furthermore, grains contain anti-nutritional factors (phytates, alkylresorcinols, protease inhibitors, lectins, etc) which are not well tolerated and in most cases tend to be health risks in humans. Of more concern is the ability of grain proteins (protease inhibitors, lectins, opioids and storage peptides) to interact with and alter human physiology.

When combined with a variety of both animal- and plant-based foods, grains are a reliable source of cheap energy, capable of sustaining and promoting human life. Like all food groups, over-consumption of grains may disrupt health and wellbeing in virtually all people. The take home message is that grains should be consumed moderately in a mixed diet.