What is Gastrointestinal Stromal Tumours (GISTs)? 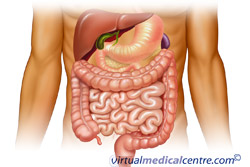 Due to the lack of a complete definition and classification the precise incidence of GIST is unknown, however, it is estimated to be roughly 10-20 per million people per year. GIST accounts for less than 1% of all gastrointestinal cancers. More than 90% of GISTs occur in adults over 40 years of age.

GISTs are equally as common in males as females and do not appear to be associated with geographic location, ethnicity, race or occupation.

Currently, there are no known specific risk factors for developing GIST.

Most cases occur are not inherited (sporadic). However, there are reports of several families in which multiple family members are affected. In these families the mutation is passed down from parent to child and occurs in every cell in their body not just the cancerous cells (as in sporadic cases). Hereditary syndromes in which GISTs occur include:

GISTs present with signs and symptoms related to the presence of a mass or bleeding. Bleeding is the most common symptom which may occur into the abdominal cavity resulting in acute abdominal pain or into the gastrointestinal tract lumen which may present as vomiting blood (haematemesis), blood stained stools (melena) or anaemia. Abdominal masses are less common and depending on their location can cause a variety of symptoms including obstruction.

Many people present with vague symptoms, which are not disease specific, including nausea, vomiting, abdominal discomfort, weight loss or early satiety. As a result, up to 50% of GISTs will have already metastasised by the time they are diagnosed.

Only 70% of individuals are symptomatic, 20% do not have any symptoms and 10% have a GIST detected at autopsy. 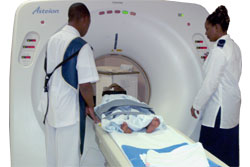 Clinical examination is guided by the individuals’s history and presentation.

Once a lesion has been identified, a pathologist will need to confirm whether the lesion is cancerous or not and if so what type of tumour it represents

A diagnosis is made based on the location and tissue type of the identified mass. Molecular studies can be used to identify GISTs with specific mutations, which may make them either more or less responsive to treatment.

GISTs exhibit an uncertain clinical behaviour. They vary from benign to malignant.

Several factors including size, appearance when examined microscopically, cellular characteristics and their genetics have been examined over many years, although, we are not yet unable to predict their behaviour.

There are several questions that you may wish to ask your doctor including:

In cases where there is a single defined lesion, the gold standard treatment is complete surgical removal. This is associated with a 48-65% five year survival rate.

If the tumour is large and its complete removal would lead to significant morbidity or loss of organ function, a medication called imatinib (Glivec) may be administered prior to its removal in an attempt to reduce its size and optimise the outcome. Partial removal is generally only performed in palliative (end of life) cases where you are not aiming for cure, but rather trying to improve quality of life by minimising symptoms.

For recurrent disease or disease that has spread elsewhere (metastatic) first line treatment involves the administration of imatinib with or without surgery. In scientific studies 50% of individuals with GIST responded to imatinib and approximately 75-85% showed at least disease stabilisation. Two-year survival rates after imatinib therapy are approximately 70% and 50% of individuals will not show disease progression.

Current data shows a dose of 400mg/day is safe, efficacious and well tolerated. Increasing doses may be considered in cases of disease progression, resistance or for individuals with specific genetic characteristics. Side effects of imatinib include oedema (swelling), nausea, muscle cramps, diarrhoea, headache, dermatitis, fatigue, vitiligo (skin pigmentation), hypothyroidism and abdominal pain. Discontinuation of treatment is associated with a high risk of relapse and for this reason, treatment should only be discontinued in cases where the disease continues to progress despite treatment, unacceptable side effects or the individual refuses further treatment.

GISTs are poorly responsive to conventional chemotherapy (<10% response) and the use of radiotherapy is restricted due to resulting toxicity to surrounding structures.

As GISTs have an unpredictable behaviour, long term follow up is essential. This should involve regular physical examination and imaging studies. CT imaging is recommended 3-6 monthly for at least 5 years. Other investigations including endoscopy may also be used for follow up.

Q&A: What does a urologist actually do?

Urologists are specialists who treat people for problems…