Introduction to brain health and exercise 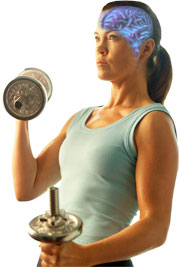 According to the World Health Organisation, up to 60% of the population do not achieve the recommended 30 minutes a day of moderate physical exercise. Accordingly, the prevalence of many physical health problems are skyrocketing and the western population is experiencing what is known as the “obesity epidemic”. The physical problems associated with lack of exercise are not the only concern. Physical activity has repeatedly been shown to influence psychology and neurology. Studies in this area suggest that exercise significantly improves cognition (thinking), decreases stress and anxiety, improves self-esteem and decreases depression.

Physical activity or exercise is defined as any physical movement induced from skeletal muscle activity that results in energy expenditure and is often described as a cheaper non-drug treatment alternative, or exercise therapy, for many medical conditions  as  the benefits of exercise are widespread throughout the body system.

People who initiate and maintain a strict exercise regime report increased fitness, mood and overall quality of life. However, it is getting to this stage that is a hurdle. Psychological disturbances are often accompanied by low enthusiasm, self-esteem and motivation which all impact on an individual’s determination and ability to start up and maintain a healthy exercise regime.

The neurological effects of exercise

Brain imaging and post mortem brain studies have identified significant changes in the brains of people that exercise regularly compared to those that do not. Many of these neurological changes are thought to be responsible for the positive psychological benefits associated with exercise. The major neurological findings are:

Further evidence from animal studies have also suggested that physical activity improves neuronal survival. This means that, in some cases, if the brain is exposed to any trauma or injury it will be less likely to be permanently damaged.

Exercise and the hippocampus The hippocampus, the brain centre for learning and memory, is greatly activated during exercise. Furthermore scientists have recently discovered that exercise, especially running, increases production of brain derived growth factor (BDGF), in the hippocampus. BDGF is a chemical released in the brain that protects neurons and promotes their growth. This is believed to be a positive finding, but further studies are required to identify the direct effect increased BDGF has on memory and mood.

Self-esteem or self-worth is a very important aspect of psychological health. A person’s self-esteem is the confidence they have in themselves and has been suggested to have separate athletic, scholastic, social, behavioural and physical components. Many people may only feel confident in one of the components and as such do not fully realise self-worth. Increasing self-esteem plays a major role in improving psychological profile.

Exercise can improve the athletic component of self-esteem which is thought to embody athletic competence, fitness, strength and attractiveness. Furthermore, the skills developed as a result of engaging in regular physical activity can improve confidence.

Physical activity can also have a positive impact on social self-esteem. Playing in a team sport or even simply receiving acknowledgement from familiar walkers exercising at the same time each day will increase feelings of acceptance and group belonging. 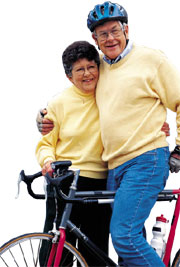 Exercise has also shown positive effects in brain functioning with accumulating evidence that memory and learning can improve with regular physical activity. This is especially relevant for studies looking into various strains of dementia. Evidence to date supports the notion that physical activity can delay or even prevent cognitive function loss. In fact, even a relatively small amount of physical activity, equivalent to either 4 hours of light exercise or 1.3 hours of vigorous activity per week, is associated with a lower incidence of dementia risk. Although it is preferable that physical activity begins at an early age the positive effects on brain functioning can even be seen in 77 year olds which stresses the point it is never too late to begin an exercise regime!

Exercise has long been associated with improvements in depressive disorders and has been indicated as a treatment when performed regularly at moderate intensity.

The relationship between exercise and depression is complex and as yet the mechanism underlying the therapeutic effects has not been established. Exercise has been shown to improve depressive symptoms and a lack of exercise has been shown to increase depression. Additionally, individuals that adopt a physically active lifestyle are less likely to develop depressive symptoms. A vicious cycle effect may exist between the two where an initial lack of physical activity can promote feelings of laziness, guilt and unattractiveness which can predispose a person to become more depressed which in turn affects motivation to begin an exercise program and so on and so forth. Exercise may be a way to break this cycle.

Exercise in children and adolescents Similarly to adults, exercise studies have yielded positive psychological effects in children and adolescents. The prevalence of psychological problems in this age group is estimated to be 10-20%. Depression and anxiety are the most common problems.

The amount of time spent exercising as well as the intensity of the exercise has been shown to significantly correlate with the psychological profiles of children aged 8-10. Although further research needs to be carried out in order to generalise this finding over a wider age group the preliminary results suggests that children that undertake at least 4 hours of light to moderate activity per day had more positive outlooks then those that participated in less than 4 hours. Playing catch is an example of a light exercise and walking is considered moderate exercise.  Furthermore, if 30 mins of this light exercise was replaced with more vigorous activity the children’s moods improved even further.