Prostate cancer is one of the most common cancers affecting Australian men. It most frequently occurs in men over 50 years of age. It is a disease affecting the prostate gland which is a male reproductive organ responsible for the production of part of the fluid portion of semen. When cancer develops in the prostate, abnormal cells grow and mutate and may start to take over the gland. Most cancers grow in the peripheral (outer) zone of the prostate compared to benign prostatic hypertrophy which tends to affect the centre of the gland.

Prostate cancer can cause a variety of symptoms including pain, problems urinating and erectile dysfunction. In other cases it may be completely asymptomatic and discovered following routine physical examination or screening investigations. You may have a raised Prostate Specific Antigen (PSA) which is a blood test measuring a certain compound produced by prostate cells or your doctor may also notice hardening or irregularity of the prostate gland when performing a Digital Rectal Examination (palpation of the prostate gland via the back passage). These investigations can help detect prostate cancer early at a stage where treatment is more likely to be effective.

The pathologist will ‘grade’ the tumour according to how abnormal the cells look and assign a number between 2 to 10 (inclusive). This is called the Gleason Score. The higher the number, the more aggressive the cancer is and the greater risk it has of progressing. Following a diagnosis of prostate cancer, you will undergo a staging process to determine how severe your cancer is and how far it has spread. Your doctor will order a series of investigations including CT, MRI and bone scans to detect any metastases (spread or seeding of the cancer) of lymph nodes, other organs (such as the liver or lungs) or bone.

Your doctor will then consider the results of all the investigations and determine the likelihood that your disease may be cured. They then will discuss the possible treatment options available to you and the risks and benefits of each. You will be given the opportunity to discuss any fears you may have about the disease or treatment. You should remember that the best treatment option will vary from patient to patient depending on a whole range of factors including your age, disease severity, other co-morbidities and overall beliefs, values and judgment.

The remainder of the article considers a specific form of treatment for prostate cancer called cryotherapy.

Cryotherapy is a relatively new therapeutic procedure, recognised in 1996 as an effective treatment for prostate cancer. Cryotherapy (also referred to as cryosurgery) is a minimally invasive procedure that may be carried out in a day surgical unit. It involves the application of specialised needles under ultrasound guidance.

Cryotherapy is broadly based on the principles of using low temperature gases to freeze abnormal and diseased cells. You may be familiar with this therapy for the treatment of skin conditions such as warts or moles. In these instances the skin lesions are frozen off using liquid nitrogen.

In prostate cancer however, the freezing is done internally. Argon is the usual gas used to induce freezing. Compared to conventional surgery, cryotherapy may be cheaper and may cause less pain and scarring.

Cryotherapy is a minor surgical procedure and using the current methods (the SeedNet Cryotherapy system) can be carried out as a short stay, day surgery procedure. This means you will likely be admitted and discharged on the same day as the procedure. Occasionally however, you may need to stay in hospital overnight.

At the start of the procedure an ultrasound probe (featured in Fig. 1 below) will be inserted into the rectum (back passage). This allows the doctor to see the prostate during the procedure and ensure the needles are inserted into the correct spot. The square grid piece of equipment seen in the image below is the template used for needle insertion. After you are anaethetised (asleep) and the equipment is ready, the doctor will then insert small needles through the perineum (skin between the scrotum and the anus) to the prostate. Several needles will be inserted via the template to outline the prostate as shown in Figure 2 below. 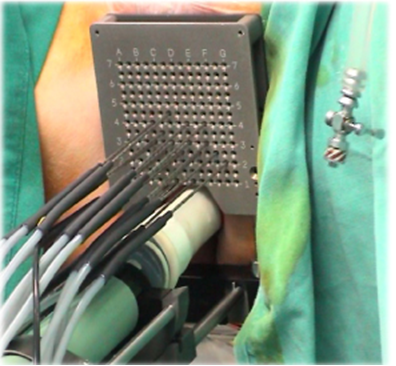 Once though the skin, the doctor can visualise the needles on the ultrasound screen as they enter the prostate gland. This is demonstrated in Figure 3 below. The needles are the small white flecks within the darker prostate outline. 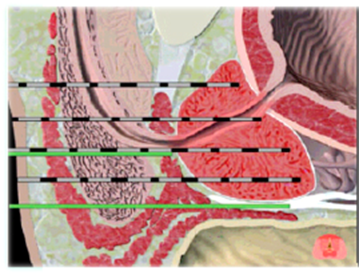 Each needle produces an ice ball of extremely low temperatures that freezes the surrounding prostate tissue. Two complete freeze thaw cycles to negative 40 degrees Centigrade are carried out. In theory the prostate cancer cells will be frozen and killed by the cryotherapy. However the design of the system means that the entire prostate is frozen.

During the procedure the urethra (the tube carrying urine from the bladder to outside the body) is protected by a warming catheter. This is removed at the end of the procedure. A smaller catheter is inserted and remains in place for 5-7 days after the procedure to allow free drainage of urine whilst the prostate remains swollen and oedematous (fluid filled).

In addition, special temperature probes are inserted into the prostate gland and wall of the rectum to reduce the possibility of freezing surrounding organs. The computer screen in the image below is monitoring the temperature within the prostate. Freezing leads to an obvious fall in temperature. 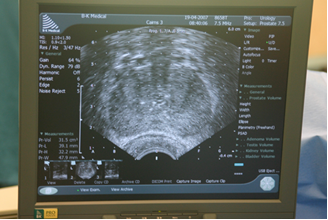 The cryotherapy procedure usually takes less than two hours to perform. After the operation you may notice swelling of the scrotum which usually settles within 3-4 days. Often there is also mild bruising of the perineum. In most cases you will be well enough to get up and mobilise on the same day of the procedure and will be back to your normal daily routine within a day or two of the procedure.

Who is suitable for cryotherapy?

In general, cryotherapy is suitable for patients with disease severity ranging from low, intermediate to high risk. It can also be used is patients who have had previous radiotherapy treatment that has failed. However the procedure has greater risks of fibrosis (scarring), adhesions and nerve and vessel damage, in the latter circumstance.

Cryotherapy is a reasonable option for patients who do not want major surgery but want to do more than just ‘watch and wait’. However it is not suitable for patients who wish to maintain an active sex life as there is a significant risk of reduced potency which may be permanent.

Crotherapy is not suitable in the following cases: 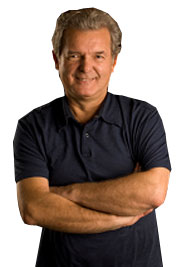 At this stage in time cryotherapy is still a relatively new treatment so long term survival data is currently not available. However studies so far considering up to 10 years of data have shown that cryotherapy is a safe and durable therapy. Between 70-92% of patients undergoing primary treatment will not have a repeated rise in PSA (as a marker of the cancer returning). The response rate depends partly on how severe your cancer was at the start of treatment. In general, lower risk cancers are less likely to recur and therefore less likely to cause a rise in PSA. Furthermore, when cryotherapy is used in patients with radiotherapy resistant prostate cancer, cryotherapy has also been shown to reduce recurrence.

Cryotherapy is therefore a safe procedure with minimal morbidity compared to other treatments (except perhaps for the increase in sexual dysfunction). Results so far have been promising. Due to its safety, cryotherapy can be repeated if necessary and can be used in patients who do not respond to other treatments.

Immediate side effects of cryotherapy are minimal. As mentioned, you may experience perineal discomfort or bruising. The former can be adequately controlled with simple analgesics such as paracetamol and codeine. You may also develop swelling (oedema) under the skin of the penis or scrotum. This usually settles within 3-4 days with rest and elevation including effective scrotal support.

The major long-term complications of cryotherapy include:

For localised prostate cancer the best or gold standard treatment is still considered to be radical prostatectomy. However for a variety of reasons (such as grade and stage of disease, co-morbidities, fears, expectations and your preferences), alternative treatments may be considered. In these circumstances cryotherapy is a safe and viable alternative to surgery or radiotherapy.

Studies have shown that overall cryotherapy is as effective as other treatments for the treatment of prostate cancer. Compared to external beam radiotherapy, it is also a quicker procedure with a shorter recovery time and may have reduced side-effects on bladder and bowel.