Congeners are biologically active chemicals (chemicals which exert an effect on the body or brain) and are often contained in alcoholic beverages, in addition to ethanol, the key biologically active ingredient of alcohol.
Congeners are produced in the process of fermentation or ageing, when organic chemicals (chemicals from plants) in the beverage break down. They may also be added during the production process to contribute to the taste, smell and appearance of the beverage.

Congeners are primarily contained in darker liquors, brandy, tequila, whiskey and wine. The clear liquors, including white rum, vodka and gin, tend to cause hangover less frequently and are preferred by people who have alcohol dependence.
For example, bourbon has almost 40 times the quantity of congeners that is contained in vodka and has been reported to have a greater intoxication effect, though this has not been confirmed. Bourbon is believed to increase the chance of a hangover more than beverages containing fewer congeners. Studies have also found an association between greater drowsiness the next day and bourbon consumption.

Many different types of congeners can be found in various alcoholic beverages.

Furfural
Furfural is a congener that inhibits yeast metabolism. It may be added to alcoholic beverages during the fermentation stage. 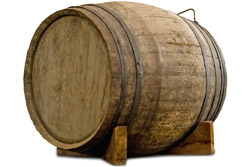 Tannins are congeners found in wine. Tannins contain powerful antioxidants such as polyphenols.

Fusel oil
Fusel oil is a congener produced in the process of alcoholic spirit distillation. The name is derived from the German word fusel, which means ‘bad liquor’. In high concentrations, it causes an off flavour. In low concentrations, fusel oil adds to the flavours and aromas of alcoholic beverages.

Acetaldehyde
Acetaldehyde is a toxic congener produced by the breakdown of ethanol.

Methanol
Methanol is a congener contained in alcoholic beverages which is thought to contribute to hangover symptoms. When metabolised, methanol breaks down into formaldehyde and formic acid. The elimination of methanol from the body coincides with the onset of a hangover. People who metabolise methanol faster than others will feel greater physical symptoms of a hangover. Whiskey, red wine, brandy and other dark spirits contain the greatest volume of methanol, and have been suggested to cause worse hangovers, although this is yet to be confirmed.