Tooth sensitivity can be classified into two categories: one may indicate a problem with the tooth‘s nerve and blood supply (the root canal); and the other may be caused by the exposure of dentine, resulting in dentine hypersensitivity. Dentine is a sponge-like material containing small channels that connect the root canal space (pulp) to the outside of the dentine (cementum). Thus, when dentine is exposed, there can be sensitivity.

Dentine hypersensitivity is a short, sharp pain caused by exposure of the dentine, which cannot be explained by any form of disease such as dental decay. Dentine hypersensitivity is a condition that can affect up to one in every second person at some time in their lives. This condition is estimated to affect about 40 million adults in the United States.

Dentine hypersensitivity most commonly affects people in their twenties and thirties, despite the fact that older groups tend to show more exposed dentine. This may be for several reasons, including the main fact that the tubes that make up the spongy dentine fill with mineral deposits which partially close the tubes, therefore reducing sensitivity. Age changes to the dentine also make it less likely to cause sensitivity.

The most common complaint is sensitivity to cold; however the pain may also be caused by:

What is actually causing pain?

Too little or too much brushing

Very strong brushing of teeth, especially in people who have slightly crowded teeth, or even a lack of brushing that results in lots of plaque and calculus developing, will cause the gums to shrink around the tooth. Shrinkage of the gums will expose cementum and root dentine, which may cause sensitivity.

Treatment of gum disease requires the dentist to literally scrape the calculus and small portions of the tooth. This could cause hypersensitivity due to the dentine being exposed.

Gums may also recede due to gum disease treatment, which may increase the chance of having sensitivity.

Dental erosion can be caused by diet, medications, drugs, reflux or regurgitation of stomach acids. This leads to a loss of some of the tooth structure, which may expose dentine. This process can lead to severe dental wear if combined with clenching or grinding, or even brushing immediately after exposure to acids.

Age changes in the gums

As individuals age, there is a tendency for the gums to shrink and expose dentine.

While sensitivity can occur due to a variety of factors, a majority of patients who undergo whitening treatments will experience bleaching-related sensitivity.

Cementation of crowns and bridges may cause sensitivity due to the chemicals in the cement. This presents a problem when an expensive treatment is completed (e.g. sensitivity occurring after a crown is cemented).

The pulp is the area in the middle of the tooth that contains blood vessels and nerves. Diseases of this area are difficult to diagnose as we cannot see directly into the root canal space (e.g. to see whether a blood supply still exists). Hence, the signs and symptoms will vary depending on the stage of the disease at the time. Diagnosis of the disease is based essentially on symptoms, and a few special tests the dentist performs.

Many of the signs and symptoms overlap between the various pulp conditions. Most people will experience sensitivity in the early stages of pulp disease, when the root canal’s blood system is still present.  When the blood supply is gone due to infection, then there will be no sensitivity, but more a dull ache.

How the pulp responds to insults

Insults or injuries to the dental pulp can occur in many ways. Usually there is something that builds up over time to destroy the pulp’s blood and nerve supply. The most common cause is bacteria in dental decay due to:

If these injuries of short duration happen often, then the tooth may not be able to recover following inflammation, the pulp will die, and the tooth may eventually become infected.

If a long-standing injury is left without treatment (e.g. bacteria as a result of a faulty filling), inflammation will become long standing, and the tooth’s pulp will eventually die. During chronic inflammation, the tooth will be very sensitive to heat and cold, and at times be quite sore to bite on as well.

It should be noted that once the pulp has died, there is no sensitivity in the tooth. This gives a false sense of security to the person, as they think that all is now well. However, during the period where there is no pain, the pulp is most likely becoming more infected, and eventually the bacteria attempts to leave the tooth via the bottom of the root, where a small gap exists. There will not be sensitivity at this stage, but there will be a dull pain when biting on the tooth in question. 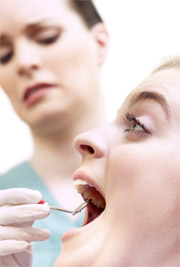 A pulp with reversible pulpitis has mild inflammation and it is capable of healing, but only if the reason for the inflammation to occur in the first place is removed by the dentist examining the person.

Pain is usually characterised by the following features:

Once the dentist diagnoses the tooth with reversible pulpitis, the tooth is reviewed over a series of appointments to see if the symptoms get worse or if they resolve.

The classic symptoms of irreversible pulpitis are:

The characteristics of dentine hypersensitivity and pulpal disease that lead to tooth sensitivity are discussed above.

The specific tests used to diagnose tooth sensitivity are essentially the same as that of dental pain.

The treatment of pulpal disease is covered in dental pain.

Nowadays, two main methods are used in the treatment of dentine hypersensitivity:

Blocking the tubes in dentine

Fluoride, when applied to the site causing pain, has been used effectively in the treatment of dentine hypersensitivity. Fluorides seem to create a barrier on the surface of the dentine, minimising the feeling of discomfort.

Long used to treat dentine hypersensitivity, toothpastes are cheap and able to be applied at home. Many toothpastes contain abrasive components to block the small tubes in dentine.

It is important that toothpastes are not placed on by a finger, but are rather brushed onto the surface. You should not use any water with the toothpaste, nor rinse immediately, as it may dilute the effect.

There are many other ways of blocking the dentine tubes, which include:

Blockade of nerve pathway to brain

Unlike other forms of treatment, potassium nitrate does not reduce the symptoms associated with dentine hypersensitivity by blocking the dentine tubes. It appears to act on the nerve, blocking its pain signal to the brain.