Sun protection for your eyes

Eyes are sensitive instruments which can easily become injured or diseased from exposure to sunlight, because of the ultraviolet (UV) rays of the sun. Ultraviolet rays are high energy,and are invisible to the human eye because they are outside the spectrum of colours that a human eye can see.

The eye, by its design, naturally provides some protection against UV rays. For example, eyelids will partially close to cover the eye in a squint when exposed to strong light. However, the eye’s natural protection is only partial, and any exposure to sunlight creates a risk of developing eye diseases and disorders. The extent of the risk varies depending on both the quality (e.g. the angle of the sun’s rays) and quantity (i.e. length of exposure) of sunlight, and the protective measures taken by an individual to reduce eye exposure to UV rays while in sunlight.

What eye diseases are associated with exposure to sunlight? 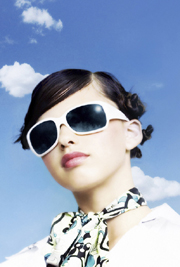 In the long term, exposure to sunlight is associated with a range of eye diseases, including:

The level of UV radiation varies due to a range of environmental factors,including:

How do you protect your eyes from UV radiation? 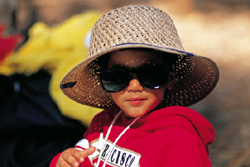 Protecting the eyes from UV radiation from the sun is the only way to reduce the risk of eye damage. Staying out of the sun at all times is impossible, so it is important that you know how to protect your eyes when they are exposed to sunlight, and about the times at which the sun’s rays are most dangerous.

Steps for protecting against exposure to UV radiation from the sun include:

Wear sunglasses when exposed to sunlight

Every time an individual goes out in sunlight, they should wear sunglasses that meet the Australian standards. Sunglasses provide a barrier between UV radiation and the eyes,thus preventing the harmful effects of UV radiation. The Australian Cancer Council recommends that individuals wear sunglasses with wrap-around (i.e. side) protection complying with Australian Standard AS/ANZ 1067:2003 (these standards outline how manufacturers should make sunglasses and which materials they should use). Sunglasses which meet the Australian Standard will be labelled with AS/ANZ 1607:2003 and a category number. In addition, the lenses of the sunglasses should offer a high level of UV protection, and be labelled UV400, or EPF9 or 10.

Wear a broad-brimmed hat when exposed to sunlight

A hat with a broad brim offers better protection than a cap, as it also blocks sunlight from the side and back. Such a hat can effectively block about 40% of UV rays from reaching the eye. It not only protects the eyes from exposure to sunlight, but also the ear, neck and face. Exposure at these sites can increase the risk of cancer.

Avoid exposure to sunlight as much as possible, particularly in the middle of the day

Sit or walk in the shade

Indoor tanning lamps emit UV radiation and can cause damage to the eyes and skin. Avoid indoor tanning if you wish to protect your eyes from their damaging effects.

It is also important to realise that children’s eyes are susceptible to damage from UV exposure (even though this damage may not produce symptoms until they reach adulthood). In order to protect children’s eyes, parents and guardians should provide children with appropriate protective eyewear and a broad-brimmed hat, and limit their exposure to sunlight, particularly in the middle of the day.