Needlestick injuries (NSIs) are among the most common accidenfffts reported by healthcare workers, including doctors, nurses and non-clinical staff. This is particularly worrying because hospital workers who are pricked with a needle may be at risk of contracting viruses that are carried in the bloodstream. The most serious of these include HIV and Hepatitis C. Over the past two decades, efforts have been made to reduce the rate of NSIs. Despite this, the rate of NSIs remains unacceptably high. This article will focus on the situation in Australian hospitals and how the rate of NSIs can be reduced by using safer technology.

Hospital staff are at a much higher risk of NSIs than the general public because needles are an everyday reality of their work. Members of the general public may be familiar with the idea of ‘needlestick injury’ because it has been heavily debated and sensationalized by the media. Safe injecting rooms were introduced in Australia in 2001 as part of a harm minimization strategy to reduce the rates of HIV and Hepatitis C in illicit drug users. Following this, people feared that the public would be at risk of NSIs from used needles discarded in parks or at the beach.

In reality, few incidents have been reported and there has been no case of any member of the general public contracting a disease after an NSI. This is because viruses cannot live outside the body for very long. ‘Dirty’ needles found in public places are usually old and do not contain any live virus.

In contrast, healthcare workers use needles all the time, and NSIs often occur immediately after using a needle to inject a patient. Healthcare workers who have a NSI are also much more likely to contract a disease because the hospital population tends to carry more viruses than others.

How often do NSIs occur?

On average, an NSI occurs once every two days in Australian hospitals. This figure is quite alarming and suggests that more needs to be done to reduce the rate of NSIs. It is possible that the rate is actually much higher, but many accidents go unreported because people may not think it’s serious enough to bother.

Nursing staff are the most vulnerable to NSIs, followed by doctors. However, hospital workers who have no patient contact may also suffer a NSI. For example, needles that drop into linen skips may injure laundry personnel.

Due to intense public health campaigns, many people believe that HIV poses the highest risk to hospital staff who have a NSI. In fact, Hepatitis C is more of a concern because it is more common among patients, particularly those receiving renal dialysis. 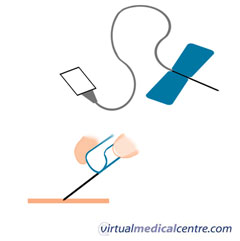 The risk also depends on what type of needle is being used. Hypodermic and butterfly needles cause the most number of needlestick injuries.

Hypodermic needles are hollow and are used with a syringe to inject substances into the body.

Butterfly needles are small needles that are used to access small or fragile veins or arteries in young or elderly patients. These needles have two wings which hold the needle in place, and flexible tubing to minimize the risk of damage if the patient moves during the procedure.

What is currently being done to prevent NSIs?

It is impossible to eliminate the source of the risk because patients who are infected with a disease must still receive appropriate medical treatment. Healthcare workers must be immunised against Hepatitis B. If a staff members comes into contact with blood from an HIV positive person, then they will receive treatment which will decrease their chance of being infected. After a NSI, the patient and staff member involved will both have blood tests to determine whether any diseases have been transmitted from one to the other.

Education programs have also been used to raise awareness about the issue. Now all staff members are advised on how to dispose of sharps properly. All needles should be put into bright yellow sharps bins immediately after use. Caps are no longer put back on needles, because this practice actually caused more injuries than it prevented.

Proper needle use and disposal

Needlestick injuries can be prevented through education on how to use and dispose of needles in a safe manner.

For members of the general public

If you find a used needle that has been discarded in a public place, the WA Department of Health (Public Health) advises you to do the following:

Please note that children should not perform the above steps if they find a used needle. They should report the used needle to a responsible adult immediately.

If you are pricked by a used needle, the WA Department of Health (Public Health) states that you must do the following:

If you find a needle in a hospital setting, make sure you follow the following advice:

Can we do more?

Preventative measures such as those described above have failed to reduce the number of NSIs to an acceptable level. Retracting needles eliminate the risk of an NSI because the needle automatically retracts into the barrel of the syringe. A plunger at the end of the needle must be pushed to engage the safety mechanism, and then pulled back to retract the needle inside.

After conducting a study at Princess Alexandra Hospital in Brisbane, researchers concluded that 62% of the NSIs could be prevented by using retracting needles. Replacing butterfly needles would further reduce the risk by 10%.

Evidence suggests that retractable needles would be a cost effective solution to the issue of NSIs. Generally, needles with safety features cost more than conventional ones. However, hospitals would also save money because there would be less staff time lost due to medical appointments after an NSI. Laboratory equipment could also be put to other uses rather than for testing staff and patients. The lower incidence of NSI would also reduce administration costs associated with reporting procedures.

There would also be substantial non-financial benefits such as lower anxiety amongst staff.

A technological approach to preventing NSIs in healthcare workers offers the most promise. Recent studies should that widespread use of retractable needles, needle-free IV systems and safety cannulae would prevent a significant number of NSIs. This in turn would reduce the associated risks of BBV, including HCV and HIV. The health and safety of Australian hospital workers needs to be the number one priority. These new devices would help make hospitals a safer environment for healthcare workers and should be introduced as soon as possible.

A new therapy to help infants with acute…