What is Post-Stroke Upper Limb Spasticity? It is estimated that up to 60,000 Australians had a stroke in 2009, a figure that will continue to rise as the population ages. For those who survive a first-ever stroke, the damage caused to the motor (movement) pathway in the brain as a consequence of the event can lead to spasticity.

Spasticity is a movement disorder characterised by muscle overactivity which significantly impedes physical movements. Spasticity does not develop in all people who have had a stroke but in the cases when it does, it can be a cause of major physical and functional impairment. It is important to remember that not all motor impairments that are seen after stroke are caused by spasticity; diminished motor functionality is seen just as commonly in those who do not develop spasticity after a stroke.

Spasticity has a significant impact on voluntary motor functioning which presents many problems for day to day living. If these problems cause pain or significantly impact daily activities it is important that the spasticity is treated to reduce this pain and discomfort. Encouraging evidence has been presented showing that if treatment is initiated early there is a reduced the risk of degeneration of muscle activity, secondary complications and functional impairment. It is for this reason that it is very important that people who have had a stroke take close care monitoring their symptoms so they can keep their doctor up to date and people who have had a stroke and who experience any of these symptoms must attend rehabilitation via a neurologist or rehabilitation physician right away.

For more information on spasticity, its causes and treatments see Spasticity.

Initially, motor impairments after stroke are experienced in as many as 80% of people in the form of hemiparesis (impairments on one side of the body) but not all these people will develop spastic symptoms. That said, severe activity and motor problems are seen in most people who have had a stroke, regardless of whether spasticity is present or not. By three months post stroke 19% of people will experience spasticity and this figure increases to 38% of people after 12 months.

Sixty-five percent of those who display initial paralysis after stroke will retain excessive muscle activity in the upper limbs 26 weeks after the event.

The features of post-stroke spasticity differ between cases, with some people experiencing milder forms of the condition than others. The location, severity and size of the brain lesion caused by the stroke are all believed to correlate to the degree of spasticity experienced.

After a stroke, spasticity is more commonly formed in the upper limbs namely biceps and the wrist, thumb and finger flexors although there are cases where lower limbs are involved.

Common symptoms of post-stroke spasticity include:

Post stroke spasticity will vary in severity depending on the nature of the damage caused by the stroke and engaging in different activities and functions will uncover the spasticity in different ways. It is for these reasons that when your doctor is conducting the spasticity assessment they need to be extensive and thorough. The doctor will probably begin with a verbal examination. It is very important when you are asked to describe your symptoms at this stage you are clear and descriptive. This will be the first step in aiding your doctor to establish the correct diagnosis.

A physical assessment of spasticity is then conducted. A wide range of physical and reflex testing is used to develop an appropriate treatment and rehabilitation plan. There are multiple scales and tools available for conducting a physical assessment, each with advantages and disadvantages. Often, to conduct a well-round physical review, more than one tool will need to be used.

The degree of spasticity can change with various positions, tasks and movements, and therefore a well-rounded review using multiple tests, settings and movement-related tasks will also be conducted by the doctor.

After the MAS has been conducted and the basic severity of the spasticity has been determined it is important to have an assessment of the impact that spasticity may have on daily life, activity and motor functioning. This is sometimes difficult for a healthcare professional to determine as the degree of spasticity can change with various positions, tasks and movements.

Firstly the healthcare professional will ask questions in a semi-structured interview to determine how the person feels about their condition; are they experiencing pain or discomfort? Are they having difficulties sleeping or performing day to day activities? Are they aware of any increased muscle stiffness?

Then in order to conduct a well-rounded review and capture any activity related manifestations of the condition the following will then be observed and assessed:

These scales will indicate to your doctor the severity of the spasticity but will not help them to understand what impact that spasticity will have on daily life, activity and motor functioning. This information is best provided by you (the person experiencing the symptoms) and it will help the healthcare team to develop a management plan that best suits your lifestyle and post stroke spasticity. The doctor will probably ask questions like:

Once the causes of the impairments have been established through continual observation and evaluation then the stroke rehabilitation program can be developed accordingly. 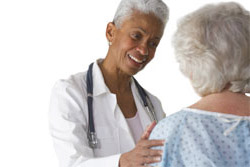 Usually post-stroke spasticity symptoms will develop to their maximum severity by 3 months after the event. After this time any progression of spasticity is believed to be due to changes in the muscles as a result of the spasticity.

Post-stroke spasticity is often associated with secondary complications, pain and impaired motor performance. Quite commonly people will compensate for certain aspects of their spasticity with certain movements and postures and as a result changes in muscles and soft-tissues can develop.

Once spasticity symptoms have developed they may not persist. Initial blood circulation disturbances or transient cerebral oedema may be responsible for symptoms of spasticity immediately after the stroke which may subside completely within 3 months. This indicates the importance of continual evaluation by a neurologist and physiotherapist after a stroke.

If you have developed post-stroke spasticity and experience pain as a consequence, or if your spasticity is significantly interfering with daily activities, you must be treated and treatment should begin as soon as possible. There is evidence to suggest that timely initiation of treatment will reduce the risk of secondary malformation in muscles and tissue, degeneration of muscle activity and impairments in muscle functioning. Therefore it is imperative you self-monitor your symptoms after a stroke and have regular checkups with your doctor to ensure that any spasticity that develops is managed as soon as possible. 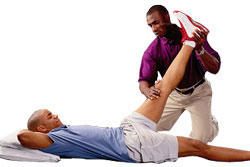 The major aims for post-stroke spasticity treatment are neurodevelopmental, in that the focus is on normalising muscle tone and movement patterns. While muscle tone can be reduced, and accordingly give relief from pain and discomfort, this does not necessarily result in improvements in movement, activity or functioning. Therefore spasticity will only be treated if it is causing pain, discomfort or if it interferes with personal care.

An ingrown toenail, skin reactions, urinary tract infections or stool impaction are known to worsen spasticity and therefore before any treatment is initialised, the doctor will make sure that the spasticity is not worsened due to a manageable condition. If these are present, they need to be treated before physical and pharmacological treatments for PSS are begun.

As with any spasticity treatment program, treatment for post-stroke spasticity must begin with physical intervention before any pharmacological options are introduced, and even then physical therapy will need to remain an active part of the rehabilitation program.

Specific physical therapies which have shown positive improvements in spasticity include: 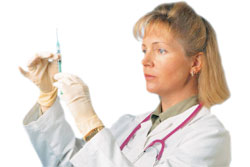 Pharmacological spasticity treatments are often unsatisfactory as the side effects may be greater than the benefit from the medications. Chemical neurolysis with alcohol and phenol reduces muscle tone effectively for a few months before it needs to be injected again, however repeat injections become less effective over time due to fibrosis (excess collagen in a tissue).

The current leading intervention for treating the spastic muscle is Botulinum toxin (BoNT – Botox) injections directly into the muscles of concern.

Botulinum toxin (BoNTA – Botox, Dysport) type A is a naturally produced protein which, when administered intramuscularly, can relieve spasticity by blocking acetylcholine release at the neuromuscular junction. BoNTA is considered to be the treatment which most effectively reduces spasticity. It is has been shown to significantly reduce both upper and lower limb spasticity resulting from stroke as indicated by a decrease in the mean MAS score after 4 weeks treatment has been reported to improve quality of life. If BoNTA injections are administrated early in the course of the post stroke spasticity, they may help to reduce overall spasticity. However, your doctor will be able to advise if this treatment is appropriate for you.