What is nicotine replacement therapy?

Nicotine replacement therapy (NRT) is a pharmacological intervention for smoking cessation. NRT delivers a dose of nicotine into the bloodstream which replaces the nicotine that is lost when a person stops smoking. Replacing nicotine is thought to ease the person away from cigarettes and other tobacco products by helping with the withdrawal from nicotine and the cravings associated with smoking cessation.

NRT has been used as a successful intervention for quitting smoking for more than 20 years. Research has indicated that NRT can increase the long-term quit rate by 50–70%. A recent study published in the United States estimated that if all smokers used NRT, in 20 years at least 40,000 premature deaths due to lung cancer and cardiovascular disease could be avoided. This does not include premature deaths associated with any other cancer or lung disease, and is therefore considered a modest estimate.

How does nicotine replacement therapy work? 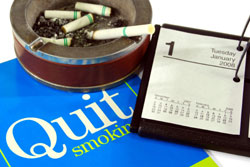 As the name suggests, NRT ‘replaces’ blood nicotine lost when a smoker attempts to quit and has stopped smoking, but without also replacing the many thousands of other chemicals consumed when smoking and which are responsible for tobacco-related diseases. For this reason, NRT has been thought of as ‘clean nicotine’. Nicotine withdrawal is one of the most challenging aspects of quitting. Therefore, by maintaining a supply of nicotine (although not as much as is obtained through smoking), the withdrawal symptoms and cravings should be less severe.

Originally only available as a transdermal patch, NRTs now include chewing gum, lozenges, sublingual tablets and inhalers. The dosing for NRT is designed so that smokers obtain a lower amount of nicotine when they use NRT than they did when they were smoking. The dose is gradually reduced over 8–16 weeks, at the end of which the smoker quits altogether.

NRT is not appropriate for all people. Before starting NRT, you must speak to your doctor to make sure NRT is the right choice for you.

The benefits of NRT far outweigh the risks when associated with smoking cessation.

Many people are misinformed about the safety of NRT. A survey has shown that about two thirds of adult smokers believe that NRT is more likely to cause a heart attack and cancer than cigarette smoking. While nicotine is an addictive chemical associated with negative health effects, it is very important to put NRT in context with the spectrum of harm of tobacco use. Cigarette smoking produces a higher dose of nicotine than NRT when the directions are followed. If NRT is a successful quit aid, as it has been for many, it may be the physiologically and psychologically healthier way to quit. Remember that using NRT over smoking cuts out exposure to over 4,000 chemicals, including carbon monoxide, nitrogen oxides and combustion products.

While nicotine is associated with tumour promotion, this is undoubtedly less of a problem than that caused by both higher doses of nicotine and the many other carcinogens (cancer-causing chemicals) in cigarette smoke.

If you are considering a course of NRT, you must see your doctor. Your doctor will be able to advise you on the best NRT option for you, as well as assess the safety and suitability of the therapy for your individual needs. The current recommendations for NRT use in Australia are:

Newly emerging evidence has found that for some smokers, chewing gum or inhaler NRTs can be used while they cut down their smoking. Previously, healthcare professionals had recommended that it is not worth cutting down smoking and that it is more effective to wait until a cold turkey quit attempt can be made. It has since been found that cutting down with the assistance of gum or inhalers can increase quitting success for some people. It is thought that the smoker does not feel the need to smoke as many cigarettes because the NRT boosts their nicotine levels.

This approach is only appropriate for smokers who are clearly not prepared to make a quit attempt. People who do opt to use this method are reminded that quitting smoking is the goal, and cutting down should not be the endpoint.

By 6 weeks with this approach, cigarette intake should be cut down by at least 50%. By 6 months, smoking should stop completely. From then on, the smoker should be weaned off NRT, and cease use completely by 12 months. 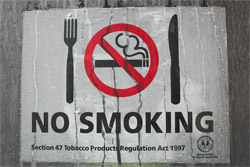 NRT can be individualised to suit different people, which is one of the major benefits for this therapy.

Some sub-populations within Australia are thought to be good candidates for NRT. While Australia is considered one of the world leaders in tobacco control, current figures indicate that this does not extend to the Indigenous population. More than 50% of Aboriginals in Australia still smoke. In Indigenous communities, smoking is considered ‘normal’ and plays a large role in relationship-building and social interaction.

People who are unemployed, did not finish year 12, or do not own their own homes are also more likely to be smokers.

Individualised smoking intervention strategies such as NRT have been found to help Indigenous smokers quit, whereas tobacco tax and mass media campaigns do not appear to be effective.

People who are concerned about weight gain after smoking cessation may find that nicotine gum is the best option, as it has been associated with less weight gain. Your doctor can discuss whether this is a good option for you.

The heart and nicotine replacement therapy

Nicotine is associated with increased rates of heart problems, which contributes to the overall shorter lifespan of smokers compared with non-smokers. Quitting smoking cold turkey is associated with an immediate decrease in nicotine levels, and instant improvements in:

Recently it has been found that NRT does not affect these improvements. A study found that heart rates and QT intervals of people who stopped smoking, with or without the help of NRTs, were comparable to those of non-smokers.

Furthermore, no adverse events have been found among people with heart disease in several clinical trials of NRT. This does not suggest that there are no risks, but provides favourable evidence that short-term use of NRT is relatively safe when used as directed. Smoking cessation during pregnancy is a prominent health issue in Australia. 17.3% of pregnant women in Australia reported that they smoked at some stage during their pregnancy, and this rate did not change significantly between 2002 and 2006. NRT can help people quit smoking, although its safety and efficacy in pregnancy and birth outcomes has not been established.

Nicotine is associated with negative pregnancy outcomes. It constricts arteries in the uterus and placenta, and as consequence may reduce foetal growth. Smokers tend to have babies who weigh 200–250 g less than non-smokers’ babies, but this is unlikely to be caused by nicotine alone. NRT has not shown any significant effect on foetal weight, but studies on this have been small and have not yet provided enough justification for recommending NRT as a quitting aid for pregnant women.

Keeping in mind that the ultimate goal during pregnancy should be to avoid nicotine and tobacco, it is believed that the benefits of tobacco cessation during pregnancy outweigh the risks of using NRT compared to the risks of continuing to smoke. While nicotine may be toxic to the foetus, the level of nicotine is reduced and exposure to the other toxic chemicals in cigarettes is avoided with NRT. In Australia, clinical guidelines recommend the use of NRT in cases where a pregnant woman is otherwise unable to quit smoking and psychological interventions have not worked.

The optimal dose, preparation and duration of NRT in pregnant women have not been established. Your doctor will need to monitor blood nicotine levels to assess the level of nicotine delivery you need. Your doctor will follow a number of guidelines when monitoring NRT use during pregnancy: NRT use is approved in Australia for 12–17 year olds under the strict recommendation and guidance of a doctor. Data from recent research has suggested that adolescents are more susceptible to nicotine dependence than adults due to the effect of nicotine on the developing brain. Nicotine use in adolescence and childhood can lead to depression and stress later in life.

There is no reason to believe that the effect of NRT on adolescents would be any less than the significant benefits evident for adults. Safety data collected from NRT studies indicates there are no problems associated with use of the medication in this age group.

Nicotine dependence in adolescence and childhood is a complex issue. First and foremost, adolescents who want to quit smoking should have counselling sessions with healthcare professionals. A lot of the time tobacco use in this age group is associated with underlying psychological factors that need to be discussed before NRT is considered. Adolescents may have a less stable commitment to quit than adults; therefore, it is important to make sure the motivation to quit is strong during counselling sessions.

Adolescents will need to be guided in the correct use of NRT by their doctor; it is especially important that they understand the danger of smoking while on NRT. It is also important that they do not share their NRT with friends. If non-smokers experiment with NRT, they are likely to go on to try other forms of tobacco.