The stomach is the organ of the digestive system that most people are most familiar with. The stomach maintains an acidic environment for two reasons – to assist in breaking down food, and to suppress the growth of bacteria.

Your doctor may decide to begin treatment without any special tests, although it is not uncommon to require a blood test, a breath test, or a faeces test. In some cases, an examination of the stomach by endoscopy may be done.

Whether or not you need any of these tests depends on your family history, any other medications you might be taking, and on the symptoms you have and how long you’ve had them. If you are concerned, though, you should ask your doctor why you’re having a test, or not having one.

A specific treatment has been developed for the eradication of H. pylori. It consists of two different antibiotic medicines – clarithromycin and amoxicillin – and a proton pump inhibitor (PPI) to reduce the production of acid in the stomach. Examples of commonly used PPIs are pantoprazole (Somac) and rabeprazole (Pariet). 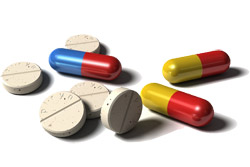 Under the most common treatment, these three medications (two antibiotics and one PPI) must be taken twice a day, every day, for seven days. The most common reason for this therapy not working is not following this schedule, or stopping the treatment too early.

Other regimes require the use of another medication called bismuth, which must be taken four times a day. In some other circumstances, the bacteria in your stomach may be resistant to the antibiotics given, in which case other medications can be tried.

Most importantly, once a working combination is found (most often, the first one tried works), this treatment need only be completed once. It is very rare to require ongoing treatment for uncomplicated ulcers. However, if complicated ulcers exist, PPIs are the first-line treatment.

Side effects that may occur with treatment for H. pylori are uncommon. However, some people may experience them. Most often these concern the functioning of the digestive tract – there may be diarrhoea, nausea and vomiting, or a sense of abdominal cramping. There may also be a headache or rash. Symptoms usually only last for as long as the treatment goes on.

If you are allergic to penicillin, advise your doctor, as it may mean you cannot take amoxicillin and hence require a different antibiotic.

You are an individual and each case must be considered according to your condition, other health problems, and any other medications you might be taking. Therefore, it is important that you speak with your doctor about undergoing treatment for H. pylori.