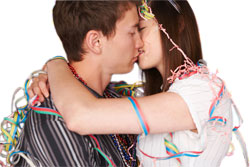 New Year’s Eve is traditionally associated with all-night parties. For many people it may involve a midnight kiss and subsequent sexual activity. Sex will sometimes occur with a new partner whose STI status is unknown. In these circumstances sex carries a risk of sexually transmitted infection (STI) and HIV infection, in addition to the usual risk of unplanned pregnancy. Because a lot of people drink alcohol on New Year’s Eve and binge drinking is also common, New Year’s Eve sex might occur when the partners are intoxicated. In these circumstances the risk of STI and pregnancy is increased, because intoxication reduces inhibitions and makes individuals less likely to use condoms to protect themselves during sex.

What is healthy sex?

Healthy sex is sex that avoids the risk of physical and psychological health problems, including STIs, unplanned pregnancy and psychological health problems. For individuals in stable, monogamous relationships, there are several ways to prevent pregnancy and STI. For example, women in a stable relationship might use a long term method of contraception such as oral contraceptive pills to prevent pregnancy. Couples in a stable relationship might also visit a health centre to screen for STIs and HIV. In a situation where both members of the couple are STI free and only have sex with each other, it is safe to have sex without using a condom, although they may still wish to use a condom as a contraceptive measure.

For individuals who do not know the STI and HIV status of their partners, using a male or female condom every time they have oral, anal and vaginal intercourse is the only way to effectively prevent infection from an STI. While there is still a small risk of STI when using a condom (e.g. if it breaks or slips off, or if the STI can be transmitted through contact with infected skin, such as with genital warts), the risk is greatly reduced. When used correctly and consistently, condoms provide 95% protection against HIV infection. Condoms also provide highly effective (98%) contraceptive protection when used consistently and correctly, and thus can also prevent unwanted pregnancy.

There are a number of risks associated with having unhealthy sex on New Year’s Eve (or at any other time of year). These include:

There are many ways to make sex on New Year’s Eve (or any time of year) healthier. For individuals who are in stable relationships, ensuring that a permanent method of contraception is being used (or another method is available for those who do not wish to use permanent methods), that both partners have undergone STI screening, and both partners are monogamous can effectively prevent pregnancy and STI infection. For individuals who have sex with a casual partner on New Year’s Eve, other measures are necessary to avoid the health risks of sex. These include:

Avoiding unsafe sex on New Year’s Eve is the best way to avoid the health risks associated with it. However, practising safe sex is not always easy, especially if the sexual partners are drunk. Even safety-conscious individuals who use a condom may be exposed to health risks if the condom breaks.

There are many ways to reduce the risk of STI, pregnancy and psychological health problems following unsafe sex. It is important for individuals who have had unsafe sex to consult a health professional as soon as possible, ideally the day after the unsafe sex.

To manage the risk of STI following unhealthy sex, individuals should visit a doctor to:

Women who have had sex that puts them at risk of pregnancy should take emergency contraception within 5 days of unprotected sex to reduce the risk of becoming pregnant. Women who had unhealthy sex and have missed their monthly menstrual bleeding should take a pregnancy test to determine whether or not they are actually pregnant. Those who are pregnant should:

Individuals who are experiencing psychological health problems following a sexual encounter may require referral to professional counselling to help them cope with their emotions. Some people may simply feel confused and guilty about having sex, while others may have experienced coercive sex or rape, and require counselling to help them cope with this. Sexual assault is common in Australia; 1 in 5 women and 1 in 20 men experience some form of sexual assault in their lifetime. Some people who have been sexually assaulted may not even realise they were abused, or may blame themselves for their assault (e.g. if they were intoxicated when it occurred). Counselling and other psychological support can also help these individuals better understand their sexual encounters (including what does and does not constitute sexual assault) and sexual rights.

Women with an unwanted pregnancy may also require counselling services, to assist them in deciding whether to terminate or continue with the pregnancy, or to help them cope emotionally with being pregnant. A GP and other health professionals can provide a referral to local services.