Almost every cell in our body contains a cell-nucleus that holds the 23 pairs of chromosomes that make up our genetic material. Each chromosome has within it the DNA (deoxyribonucleic acid) that makes up our hundreds of thousands of genes. Many of these genes make proteins that have a number of roles in the human body. Some proteins are structural and make up our tissues like bones and muscles. Proteins called enzymes are involved in chemical reactions like breaking down the food we eat. While others are like little messengers that send signals around our body, these proteins are known as hormones.

All humans share the same set of genes but the precise DNA sequence of these genes differs slightly between individuals (by about 0.1-0.2%). While these differences account for things like differing hair, eye and skin colour, they can also be the cause of genetic disease or disease susceptibility. A disease causing change in the DNA of a gene is called a mutation. 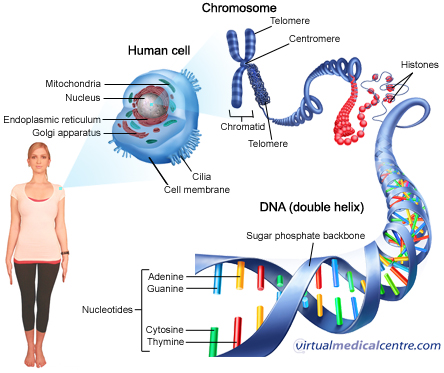 This is used to confirm a diagnosis when a doctor sees a patient with symptoms suggesting a particular genetic disease. For example, a person with a movement disorder may be tested for Huntington’s disease. The genetic information the doctor gets is useful in the treatment, management and genetic counselling of the patient.

Some genetic tests are used even when symptoms of a disease are not seen, but the genetic information may help in predicting if the person is at risk of developing, or are susceptible to a particular disease.

Before a genetic test is carried out a doctor will do a clinical examination and get a detailed family history. This will help the doctor in working out which gene may be responsible for the disease in question. The patient will be referred to a genetic counsellor who can inform them about everything that is involved with genetic testing. The genetic counsellor can tell you what it means to have a particular genetic change and how this can affect you or your family.

Almost all genetic tests require a DNA sample from the patient, this is usually obtained by either a blood sample or mouthwash (buccal swab). This is then taken to a genetic testing lab for analysis.

A number of techniques are used in the process of genetic testing, these include:

The polymerase chain reaction (PCR) is a method of amplifying (copying) a small amount of DNA to a larger amount so that it can be analysedclosely. The genetic code of the DNA can be determined by a method called ‘DNA sequencing’. This then allows scientists to determine whether or not there is a change or mutation present in a gene of interest.

If the gene associated with a hereditary disease in a family is not known then linkage analysis can help in identifying the responsible gene. The technique is based on the fact that special DNA sequences that flank particular genes will travel with the gene when passed from parent to child. These DNA sequences are called ‘polymorphic markers’ or ‘polymorphic repeat sequences’. The closer that one of these markers is to gene the more likely it is that it is travelling with the gene. If a particular polymorphic marker is found only in members of a family with a particular disease then it is likely that a gene located near the marker is associated with the disease. 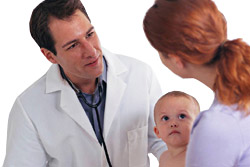 Through genetic testing we may be able to screen populations for diseases in order to better diagnose, treat and prevent disease.

Reducing the incidence of disease has major impacts on and is of great importance to:

If the genetic cause of a disease is identified in a patient, it does not necessarily guarantee that there is a cure for the disease. A treatment or therapy may not yet have been developed. While to many people the identification of a disease gene means a large step towards finding a cure, it is often of no great immediate benefit to the patient.

As carrier screening would involve the screening of a possibly asymptomatic population, it inevitably raises a number of ethical issues in terms of consent, privacy and education, which need to be considered. It is important that all persons involved are appropriately educated, their consent obtained and the confidentiality of their genetic information upheld.

Prenatal genetic screening can inform parents of the health status of their unborn child. In the case of a prenatal diagnosis of disease, parents are able to assess their options and make decisions accordingly. Foetal genetic testing does however raise the issue of abortion, often a particularly sensitive and controversial matter.

Cystic fibrosis (CF) is the most common life-threatening inherited disorder affecting the Australian population: the disease affects 1 in 2500 births. Symptoms of CF include recurrent chest infections, problematic coughing, salty sweat and abnormal stools. CF causes the body to produce a lot of thick sticky mucous that affects a number of the body’s organs (especially the lungs and pancreas) by causing clogging and blockages. Repeated infections can cause irreversible and lethal lung damage. In the pancreas, mucous can block the release of enzymes that are important in food digestion which means that people with CF often have nutrition problems.

The gene associated with CF makes a protein that is responsible for the transfer of salt in and out of the cells in our body. This gene is called the CFTR (Cystic Fibrosis Transmembrane Regulator) gene and is located on chromosome seven. As everyone has two copies of chromosome seven, everyone also has two copies of the CFTR gene. CF is a recessive genetic condition, which means for someone to have the disease, both copies of the CFTR gene must be faulty. For a child to be at risk of inheriting the disease, both parents must be carriers of the faulty gene (have one faulty copy each). 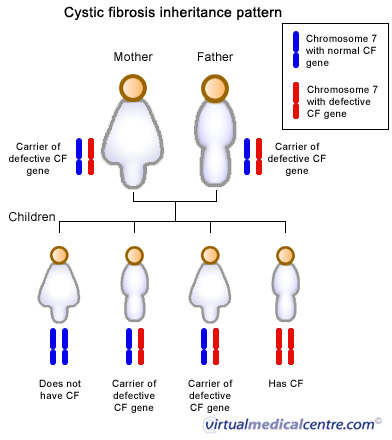 All babies born in Australian hospitals are screened for CF. A small blood sample is taken after birth, if this comes up positive then the CFTR gene will be checked in more detail. A final diagnosis is made with a sweat test, where the amount of salt in the sweat is measured. Newborn screening for CF will pick up most cases (about 95%) but it will miss some. Early diagnosis of CF means that you can prepare for the future management of the disease and get access to the best possible treatments.

Carrier testing for CF is for people who don’t have the disease to find out if they carry a faulty gene copy. The test is most relevant to partners of someone who is a carrier or direct relatives of someone with CF.

Pre natal testing for CF can be done during pregnancy. They are usually offered to those who already have a child with CF or where one or both partners are carriers.

There is currently no cure for CF, though doctors and scientists are working towards finding ways to repair or replace the faulty gene.

A neurosurgeon is a surgeon who specialises in…

What is a Neurologist and What Do They Do?

New research published in Diabetologia (the journal of…

Family's Health
Cholinesterase Test: What it is, What it’s For & Results Explained