Visual training is the practice of exercising the eyes with the aim of overcoming vision disorders, in particular those relating to binocular function (i.e. vision difficulties stemming from the misalignment of the eyes). Eye exercises are also commonly used to relieve the eyes after long periods of focused vision (e.g. computer use). While eye exercises are commonly prescribed treatments for visual disorders, not all eye exercises have been proven effective in treating eye problems.

Visual training has been used for centuries, to treat visual disorders and other problems (e.g. academic performance). In its early days, visual training was typically applied to infants and largely involved strategically placing bright objects in the infant’s environment to encourage it to look in particular directions. It was not necessarily applied for health reasons however. In some cultures where being cross-eyed was considered a mark of beauty, bright dots were drawn on children’s foreheads to encourage them to look cross-eyed!

The practice of visual training by ophthalmologists began officially in 1928, when a branch of ophthalmology known as orthoptics was recognised in Britain for the first time. Since then, visual training has come to be practiced mainly by optometrists. The eye exercises currently involved in visual training have evolved significantly since its beginnings. In addition to numerous home-based eye exercises which typically involve shifting the focus of vision from near to distance objects, there now also exists a range of specialist equipment which is used to conduct supervised visual training in the office of an eye professional.

Despite its long history, scientific evidence regarding the effectiveness of visual training is limited and exists for only a few vision disorders. These are discussed below.

Strabismus, also known as convergence disorder, is a condition in which the eyes are not properly aligned. It is the condition which visual training has most commonly been used to treat and the condition for which there is the best evidence regarding the effectiveness of eye exercises. There is evidence that eye exercises are effective in correcting convergence disorders in both children and adults and that a combination of office and home based therapy is more effective than home based therapy alone.

Amblyopia is a condition in which one eye is more dominant than the other. It is commonly treated by patching the dominant eye, in order to encourage activity in the lazy or amblyopic eye. While scientific evidence regarding the effectiveness of this treatment is limited, available evidence suggests that patching the dominant eye improves vision in the amblyopic eye. Patching for six hours per day appears to be equally as effective as full time patching. There is also evidence that the risk of amblyopia recurring is minimised by gradual reduction in the length of treatment (to two hours per day) before cessation.

Available evidence shows that visual training in patients who retain some residual vision following a brain or optic nerve injury can improve their field of vision.

Conditions not affected by visual training

There is currently insufficient evidence to support the use of eye exercises for the following disorders:

Eye exercises for the correction of visual disorders

A range of eye exercises have been used in home and office based visual training with the aim of correcting visual disorders. These are discussed further below.

Pencil push up therapy is the eye exercise most commonly prescribed by ophthalmologists. It is an eye exercise in which a pencil is held directly in front, at arm’s length. The pencil is then drawn slowly towards the nose. The exerciser follows the pencil with his/her eyes, trying to keep it in clear focus. When the pencil starts to appear as a double image, the pencil should be drawn away from the nose again. The exercise is repeated several times per session, for several sessions per day. The aim is to correct binocular visual disorders, in particular strabismus.

Lens fixation is an eye exercise conducted with the assistance of an ophthalmologist, using a series of lenses of different strengths. The patient views an object through these lenses to train the eyes to adjust to different visual fields.

Prism fixation is an eye exercise conducted with the assistance of an ophthalmologist in which the patient looks into a series of prisms with specific orientations. The orientation of the prism will depend on the condition being treated.

Shifting fixation is an eye exercise conducted with the assistance of an ophthalmologist in which the patient is required to change focus from near to distant objects. It is used to train the eyes to adjust to different fields of vision.

Patching is the practice of covering one eye with a patch to encourage the patient to use the alternate eye. In some instances the patient will be asked to carry out exercises, such as focusing on distant letters, while the dominant eye is patched. It is typically used as a treatment for amblyopia.

Eye exercises for the relief of temporary eye irritations

Eye exercises have also received increasing attention as a means of reducing temporary eye irritations induced by strain from long periods of focused vision. These eye exercises, which are discussed further below, are particularly relevant to, computer users who spend long periods of their working day focusing on a computer screen, and have a high risk of developing eye and visual disorders.

Performing regular exercises to ensure the eyes move to their full range of vision is important, particularly for individuals who spend lengthy periods of time looking in a particular direction (e.g. at a computer screen or reading material). Individuals can exercise the eye’s full range of motion by performing the following, simple exercise: 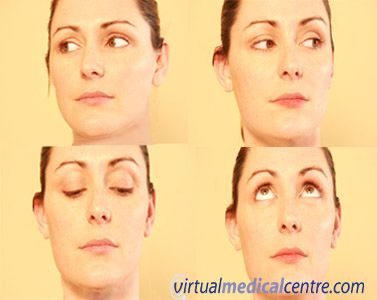 Individuals who spend lengthy periods of time focusing on computer screens need to rest their eyes by focusing on distant objects periodically. Computer users should look away from the computer periodically and find an object at least three metres away to focus on. This may be a picture or something outside the window. The individual should then focus on the object for a short period of time.

Clinical optometrists often suggest the “20/20/20 rule” for visual rest, that is, after 20 minutes of computer use, look at something 20 feet (6 metres) away, for at least 20 seconds. Computer programs with an appointment reminder function can be utilised to help computer users follow this rule.

Despite the lack of evidence for the efficacy of eye exercises in the treatment of most visual and other disorders, practitioners agree that eye exercises are not typically associated with eye damage, with one exception. A practice called sunning, which first arose in the 1920s but gained popularity mainly in the 1960s, in which an individual looked directly into the sun to normalise their vision, is now known to be associated with an increased risk of a number of eye diseases.

Eyes are sensitive instruments which can easily become injured or diseased from exposure to sunlight, because of the ultraviolet rays of the sun. Eye diseases associated with sun exposure include the deadly condition squamous cell carcinoma of the eye, as well as a number of conditions which reduce visual acuity, including cataract, ptergyum and age-related macular degeneration.

For more information, see Protecting Your Eyes from the Sun.