What is Diverticular Disease (Diverticulosis; Diverticulitis) 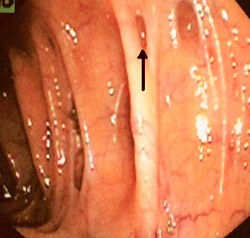 The condition is common in the West. It is rare before the age of 35, but the incidence increases with age (25% in those over 40 years old in Western society) although it is mostly asymptomatic. It is uncommon in countries where a high fibre diet is consumed.

Since this condition is mainly seen in areas of low fibre intake – this is considered to be the main risk factor. Less fibre results in harder, more compact stools which require more pressure within the colon to propel them along. These high pressures lead to diverticular formation.

Although this condition is common, most patients are asymptomatic. Out of the symptomatic patients (who present with diverticulitis or bleeding) – only 30% will develop troublesome enough complications and have a severe enough disease to require an operation. The disease will usually lead to isolated attacks of diverticulitis or haemorrhage (blood loss per rectum) which will usually subside with conservative management, but can potentially be complicated by abscess formation, perforation, or stricture. Complications such as these may be fatal if untreated.

In uncomplicated cases (where there is diverticulitis but no perforation or abscess) early intervention with appropriate antibiotics may alow for better treatment.

Patients (which is only a small proportion of the ones with diverticular disease) which have presented with an attack of diverticulitis can have very variable prognosis. Uncomplicated diverticulitis usually settle on its own with conservative management. However, if the disease is complicated by an abscess, perforation, or severe haemorrhage the mortality can be high. Furthermore, patients who have had more than 2 episodes of uncomplicated diverticulitis are likely to develop further episodes. These patients usually require a surgery (the involved segment of bowel is resected) either at the time of hospital admission (in complicated cases), or later to prevent further episodes.

Patients with diverticular disease should be counselled on the benefits of a high fibre diet. Bulking agents and laxatives could also be added until stools are soft and defaecation is painless.

Patients with acute diverticulitis are admitted to hospital for bed rest, nil by mouth (with iv fluids), analgesics, and IV antibiotics (e.g. cefuroxime and metronidazole). Patients presenting with PR bleeding are resuscitated and given blood transfusion.

Complicated disease (perforation, abscess, multiple attacks, uncontrollable bleeding) usually requires surgery to remove the diseased segment of colon. There are various surgical techniques available depending on the site of the disease, and a temporary stoma is usually needed (a “stoma bag”), although this is reversed after around 6 weeks.