Colon cancer: Adenocarcinoma of the colon

What is Colon Cancer (Adenocarcinoma of the Colon)

Overall, the function of the colon (large bowel) is to absorb water from the stool. When the ilium deposits its contents into the caecum, they are extremely liquid. They gradually solidify as they progress around the large bowel.

Statistics on Colon Cancer (Adenocarcinoma of the Colon)

Colon cancer is common but occurs very rarely in young adults. It becomes more common with age. Females more than 50 years old are most at risk. Geographically, the tumour is found worldwide, but is most common in areas that have low fibre diets. Areas of the world with high fat consumption and low fibre consumption include Europe, the US and Australia.

Risk Factors for Colon Cancer (Adenocarcinoma of the Colon)

At particularly high risk are people with hereditary conditions such as familial adenomatous polyposis or hereditary non polyposis colorectal cancer. With these conditions, colon cancer can occur even in patients in their late teens and early twenties.

First degree relatives of patients with colorectal cancer have an increased risk of colon cancer, particularly if the relative develops it at a young age.

Certain types of polyps, notably villous adenomas have the potential to become malignant. Patients who have previously had a polyp in the large bowel should undergo regular colonoscopy (ask your doctor how often).

Patients who suffer from ulcerative colitis have a ten-fold risk of colon cancer, and should undergo regular colonoscopy.

A high fat, low fibre diet, especially if high in red meat, is linked to colon cancer. People who suffer from obesity are also at an increased risk.

Progression of Colon Cancer (Adenocarcinoma of the Colon)

The tumour spreads by invading the bowel wall. Once it crosses through the muscle layer within the bowel wall, it enters the lymphatic vessels, spreading to local and then regional lymph nodes. Sometimes it spreads via the blood stream to the liver, which is the most common area of metastasis from this tumour. Other human organs that may be affected by blood-borne spread are the lungs, less often the bones, and even less often the brain. If a lot of tumour cells get through the bowel wall, they tend to float around as a small amount of fluid within the abdomen and can seed the covering of the bowel (peritoneum). This type of cancer seeding produces small nodules throughout the abdomen that irritate tissues and cause the production of large amounts of ascites (fluid).

How is Colon Cancer (Adenocarcinoma of the Colon) Diagnosed? 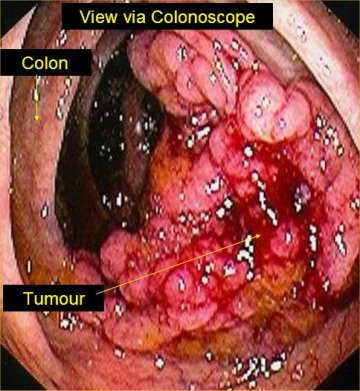 General investigations of colon cancer may show anaemia or abnormal liver function tests. The blood albumin level may be low. If liver involvement is severe, the clotting profile will be abnormal with a raised INR (International Normalized Ratio).

Prognosis of Colon Cancer (Adenocarcinoma of the Colon)

Early colon cancers have an extremely good prognosis. If they have not invaded through the muscle wall, the vast majority of colon cancers may be cured by surgery. Once the tumour has breached the muscular wall and gone to the regional lymph nodes, over 60% of patients will still survive for at least 5 years. If the tumour has spread to other organs, such as the liver or lung, the current 5 year survival rate is approximately 10%.

How is Colon Cancer (Adenocarcinoma of the Colon) Treated?

The treatment of choice for early colon cancer is surgery. For tumours that have not reached the muscular layer within the bowel wall, this will be curative in more than 90% of cases. Colon cancer surgery is usually carried out to remove the primary tumour for all cancers except those that have spread to distant organs. In some of these cases the primary tumour may be resected if the bowel looks as though it will become obstructed. Your surgeon, gastro-enterologist and oncologist can advise you.

If the colon cancer has spread to the liver, longer term palliation can still be achieved by surgery for the primary tumour to prevent bowel obstruction, followed by specific treatment for the metastases. If there is just a solitary liver metastases in one side of the liver, there is quite a strong argument for surgery to remove it in patients who are physically otherwise quite well. If the colon cancer has spread to bone and is causing pain, local radiotherapycan be very useful at controlling local symptoms. The standard adjuvant therapy for resected colon cancer is 5-FU and calcium folinate given for six months. Standard therapy for metastic colon cancer is irinotecan, 5-FU and leucovorin. Each of the agents in this regime is administered by IV injection weekly for 4 weeks every 6 weeks.

Improvement in symptoms is an important measurement. Specific monitoring may be by measurement of serum CEA. If curative surgical resection has been achieved, repeated checks on a yearly basis by colonoscopy are advisable. Colon cancer imaging is normally carried out either by ultrasound or CT to check for recurrence in the liver or lymph nodes. For metastatic disease, serum CEA can be very helpful in gauging response to treatment. Abnormal liver function tests can be monitored and imaging of any soft tissue metastases, such as in the liver or lung, can be performed. Symptoms that may require attention are fatigue from anaemia, visceral pain from liver metastases and, less commonly, somatic pain from bone metastases. If lung metastases are present there may be pleural effusions causing breathlessness. Effusions may require drainage.