All cells, including those that make up blood, have a combination of substances known as antigens on their surfaces that is inherited. Antigens function to enable our immune system to distinguish the body’s own cells from foreign invaders. When invaders are recognised, they are destroyed by antibodies, which are also produced by the immune system. In blood typing, antigens on the surfaces of red blood cells (RBCs) are also known as agglutinogens and the antibodies that react against them are also called agglutinins. Antibodies in the blood are found in the plasma.

The ABO blood groups are made up of 4 types of blood – A, B, AB and O. An individual’s ABO blood type is determined by the hereditary presence or absence of the antigens A and B on the surfaces of RBCs. Antibodies of the ABO group appear in the plasma 2-8 months after birth mainly in response to the bacteria that inhabit the intestines. However, antibodies cross-react with RBC antigens that are different to those present on the individual’s own RBCs. This cross-reaction can be fatal and therefore has great significance in blood transfusions.

An antibody can attach to several RBCs at once and bind them together. Agglutination is the clumping of RBCs bound together by antibodies. In giving transfusions, it is very important that the donor’s RBCs not agglutinate as they enter the recipient’s bloodstream.

Type AB blood is sometimes called the universal recipient because it lacks both anti-A and anti-B antibodies, so it will not agglutinate donor RBCs of any ABO type.

Type O may sometimes be called the universal donor, because since there is no “anti-O” antibody, recipients of any ABO type may receive type O blood. 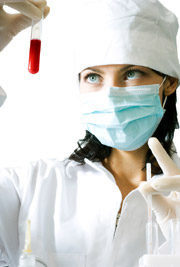 The Rhesus or Rh blood group is named after the rhesus monkeys in which they were first discovered. Individuals either belong to the Rh-positive (Rh+) or Rh-negative (Rh-) Rhesus blood group. People with the Rh+ blood group have D antigens on the surface of their red blood cells, while Rh- individuals do not.

In contrast to the ABO group, anti-D antibodies that react against D antigens are not usually present in the blood under normal conditions. They only form in Rh- individuals who are exposed to Rh+ blood. If an Rh- receives an Rh+ transfusion, the recipient produces anti-D antibodies. Since anti-D does not form instantaneously, there is little danger in the first mismatched transfusion. However, because the recipient will now start producing anti-D, a subsequent Rh+ transfusion could agglutinate the donor’s RBCs.

A related condition can occur when a Rh- woman is pregnant with a Rh+ foetus. The first pregnancy is generally uneventful since anti-D does not form right away, so that even if the mother is exposed to Rh+ foetal blood via miscarriage or placental tearing at the time of birth, there is no danger to her first Rh+ child. However, she does begin to produce anti-D antibodies upon her first exposure to Rh+ foetal blood, although this does not occur instantaneously. If she becomes pregnant again with a Rh+ foetus, her anti-D antibodies can pass through the placenta and agglutinate the foetal RBCs. Agglutinated RBCs haemolyse (release their Hb), and the baby is born with a severe anaemia called haemolytic disease of the newborn (HDN), which may kill the infant or leave brain damaged.

HDN is relatively easy to prevent, while very difficult to treat. A Rh- mother is at risk of having a Rh+ baby if the baby’s father is Rh+. As a result, it is now common to give immune globulin at 28-32weeks gestation and at birth to any pregnancy involving a Rh- mother and a Rh+ father. Immune globulin binds foetal RBC antigens so that they cannot stimulate the mother’s immune system to produce anti-D, hence preventing HDN.