Benefits and Risks of Exercise During Pregnancy 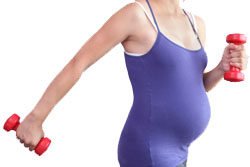 Many women are hesitant to engage in any sort of physical activity while they are pregnant, and rightfully so. Exercise has been believed to increase risks associated with pregnancy but many of these beliefs have not been proven with scientific evidence. It has only been in the last ten years that this area has been thoroughly researched and it has been found that not only is exercise during pregnancy safe but it is beneficial for both the mother and for her baby.

This is not to say that there are no risks at all. All women who exercise while pregnant should seek advice from their doctor to ensure they are not over doing it or engaging in specific activities that should be avoided.

More information on Exercises to Do and Avoid during Pregnancy. 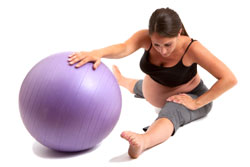 Exercise is protective against the most common complication of pregnancy, gestational diabetes mellitus (GDM). Training large muscle groups have been shown to help normalise blood sugar levels through improving glucose utilisation and insulin sensitivity. Women who exercise during pregnancy are significantly less likely to develop GDM than those who are physically inactive.  This effect is particularly strong in women who are physically active for at least one year before becoming pregnant and then continue exercising during pregnancy.

More information on Exercise before Pregnancy.

The risk of preeclampsia is significantly reduced in women who exercise during pregnancy compared to inactive women. This effect is strengthened in women who are physically active before as well as during their pregnancy.

There tends to be a lower rate of caesarean delivery among exercising women.

There is evidence that maternal exercise may reduce birth weight of the infant but studies suggest that this effect is minor and not associated with adverse outcomes for the infant. Exercise in pregnancy is associated with a decrease in offspring that are significantly small for gestational age (SGA). SGA means that for the time spent in gestation (the gestational age) the infant is in the smallest 10% for all infants born at that age and that sex. So while there may be trends that indicate that exercising during pregnancy decreases the birth weight of offspring, this is not significant or harmful as exercise reduces the risk of an offspring being significantly small.

It is important to recognise that birth weight is not the only indicator of impaired foetal growth. There are other indicators that can be measured to fully assess whether the infant has grown optimally during pregnancy. Small abdominal circumference is directly correlated to a small liver and can also be related to high cholesterol levels in later life. Small head circumference is directly correlated with small brain size and accordingly an impaired IQ. Small head circumference can also indicate that the baby will grow to exhibit high blood pressure, an increased risk of heart disease and impaired glucose tolerance. No negative effect of exercise on these measures of foetal growth has been identified but further research into this area is necessary.

The birth weight of the child is affected less by exercising during pregnancy than the mother’s body mass index (BMI). Overweight and obese women are more likely to have babies with a large infant birth weight. Women who exercise are less likely to have larger babies. Therefore exercise in pregnancy may elicit a “protective” effect against offspring that are identified as large for gestational age (LGA).  LGA means that for the time spent in gestation the infant is in the largest 90% for all infants born at that age and sex. 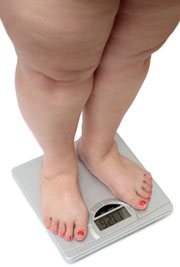 Maternal obesity and overweight is an increasingly prevalent issue due to excessive weight gain during pregnancy and mothers retaining this weight for up to and over 6 months after the baby is born. This risk is increased in women who have previously retained weight after pregnancies. Gaining excessive weight during pregnancy is defined as putting on 10% or more than the original body weight before the pregnancy. Excessive weight gain during pregnancy increases the risk of pregnancy-induced hypertension (preeclampsia) and GDM. Maternal overweight and obesity is a large indicator of obesity later in life for the infant and for the mother. Furthermore, foetal distress is twice as likely for the infants of obese women than those of a normal weight.

More information on Health Risks of Overnutrition in Pregnancy.

Exercise can be used to combat excessive weight gain with the help of your doctor who may prescribe a safe exercise regime to adopt during pregnancy. In order to reduce excessive weight gain your doctor will suggest aerobic exercises that utilise a large number of muscle groups, if this is believed to be safe for you and your baby. Aerobic exercises that do not pose any risks during low risk pregnancies include walking, stationary cycling, aquatic exercise or low impact aerobics around 3 to 4 times a week.

More information on How Much Weight to Gain during Pregnancy.

Psychological benefits of exercise during pregnancy

Studies have identified that women who keep fit during pregnancy are more relaxed and therefore cope better with the emotional and physiological strains of pregnancy, including the demands of labour. Women who exercise have a better sense of wellbeing due to a number of positive effects from exercise such as greater weight control, better body image and self-esteem, improved sleep and increased energy levels. It is believed that this positive effect on mental health continues after pregnancy and may decrease the incidence of postnatal depression.

Physiological benefits of exercise during pregnancy 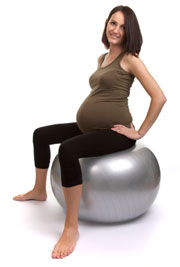 Evidence has shown that women who exercise have:

The benefits are also maintained after birth with some women reporting improved sporting performance in the months immediately following birth. This is thought to be related to the increased respiratory volume, cardiac output and blood volume that occur during pregnancy which is accompanied by improved oxygen capacity.

Risks of exercise during pregnancy

While exercise has been established as a safe practice for women who are pregnant, there are risks that can make it dangerous for some women with particular medical conditions.

Firstly, the hormones stimulated during pregnancy have the potential to induce premature contractions, although the actual risk of this event has not been investigated. Exercise also causes blood to be redistributed from internal organs to skeletal muscle and as a result there is a significant reduction in oxygen and nutrient delivery to the placenta.

Potential mechanisms behind why exercise during pregnancy can be a risk have been identified, yet there have been no studies that have shown these have a significant effect on foetal wellbeing. The major concerns include:

More information on Safety Considerations when Exercising during Pregnancy.

Contraindications for exercise during pregnancy 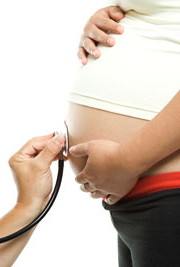 Medical conditions may heighten the potential dangers of exercising for some women, and in these cases exercise should be avoided. These include women with: