Asbestosis is a fibrotic disease of the lungs caused by chronic exposure and inhalation of asbestos fibres. Asbestos is mixture of chemicals that occurs naturally as a fibre substance and is widely used in the building industry for insulation, roofing and fireproofing. Asbestosis diffusely affects the lungs, predominantly damaging the interstitium (the connective tissue between airspaces). The lungs become fibrotic and stiff. Asbestos exposure can also damage the pleura of the lungs and lead to other diseases such as mesothelioma and lung cancer.

It is estimated Australia that around 3,000 Australians die each year from asbestos-related diseases such as asbestosis. This number is expected to increase even further as there is a time delay between asbestos exposure and development of disease. It is predicted that the incidence of asbestosis and asbestos-related malignancies such as mesothelioma will peak in the year 2025. Following this time, the rate of illness should decline as Australia has now implemented strict health and safety regulations regarding the use of asbestos.

A number of occupations are associated with asbestos exposure. Those who have been involved in asbestos mining or the building trade (fire-proofing, pipe lagging, electrical insulation or roofing) are at the greatest risk. Shipyard, wharf and power station workers are also at risk. Any amount of asbestos exposure is dangerous but in general, the greater the amount of asbestos build-up in the body, the greater the risk of disease. Asbestosis is not limited to persons working directly with the material. Relatives who cleaned highly contaminated clothes often have sustained enough exposure to contract asbestosis.

Low level exposure is common in the general population due to high rates of asbestos use in homes, schools and buildings in the past. These people may have asbestos bodies and pleural plaques in the lungs but do not develop problems with lung function like patients with asbestosis.

Blue asbestos is able to penetrate deeper into the lung than white asbestos; this probably accounts for its greater ability to lead to scarring.

Inhaled fibres are ingested by alveolar white blood cells (macrophages). Most are cleared from the lung, but some remain as asbestos bodies. The activated macrophages release a variety of inflammatory chemicals which perpetuate the inflammatory process. Eventually this leads to widespread fibrosis of the lungs. (Note that fibrosis is one of the body’s defense mechanisms- the body tries to wall off foreign material but this impairs lung function).

There is a direct correlation between the degree of exposure and the degree of lung fibrosis. The fibrotic process may progress in the absence of further environmental exposure.

All disease processes are dose related – i.e. the more exposure, the higher risk. There is a considerable time lag between exposure and disease development (particularly true for malignant mesothelioma). For asbestosis it usually takes 5-10 years from the time of heavy exposure for the disease to develop.

Typical symptoms of asbestosis include progressive breathlessness and a dry cough. As your lungs become stiffer you may notice that you are breathing faster and shallower. Your doctor will also take a detailed occupational to determine whether there has been a significant level of asbestos exposure. This helps distinguish asbestosis from other causes of pulmonary fibrosis.

In addition it is important to know your smoking history to determine your risk of developing lung cancer.

Your doctor will perform a careful clinical examination of your respiratory system. In particular they will be looking for clubbing of the fingers (swelling of the end of the fingers or loss of the angle between the nail and the nail bed) and inspiratory crackles when listening to the chest. This sound is caused by the stiff and fibrotic airways popping open at the end of inspiration.

How is Asbestosis Diagnosed?

To confirm the diagnosis of asbestosis, your doctor may perform the following investigations: 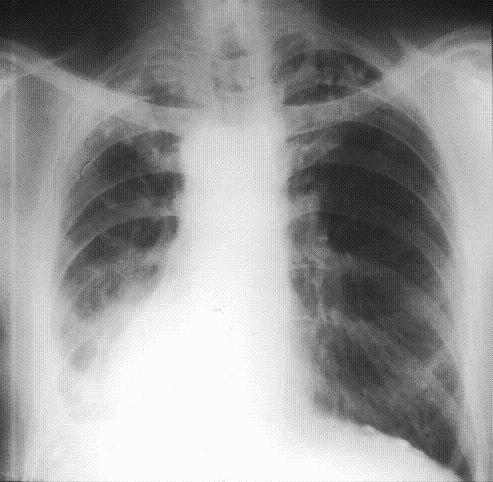 Prognosis depends on the level of exposure and the presenting symptoms. The presence of asbestos bodies or pleural plaques alone does not significantly alter life expectancy. However if asbestosis (that is fibrosis) develops, the overall prognosis is quite poor. This is a progressive disease and to date there has been no treatment identified that can halt the process.

If your asbestosis is complicated by cancer of the lung or pleura (membrane covering of the lungs) the prognosis is even worse. The median survival following diagnosis of mesothelioma is only 2 years.

How is Asbestosis Treated?

Unfortunately there are no treatments available that can alter or halt the progress of disease. Management will therefore focus on treating symptoms and making you feel comfortable. This may include methods to remove secretions from the lungs by postural drainage, chest percussion, and vibration or prescription of aerosol medications to thin secretions. You may have to perform respiratory exercises which help relieve your breathlessness and improve your overall fitness and well-being. In addition you may require oxygen by mask or by a plastic piece that fits into the nostrils. This can be provided at home or in small portable tanks.

It is extremely important that if you have a history of asbestos exposure that you quit smoking. Asbestos exposure and smoking together greatly increase your risk of lung cancer.

Medical screening and radiological examination of exposed workers helps identify asbestos-related disease early. If any disease is noted, then removal from possible exposures is advisable. If you have asbestos-related illness following occupational exposure you may be eligible for financial benefits. Governments in Australia and other countries have introduced these practices to help asbestosis sufferers. You should discuss with your doctor whether you will be eligible and they can contact the appropriate authorities.