Learn more about Gingivitis and Periodontitis, the Symptoms of Gum Disease, and Cure 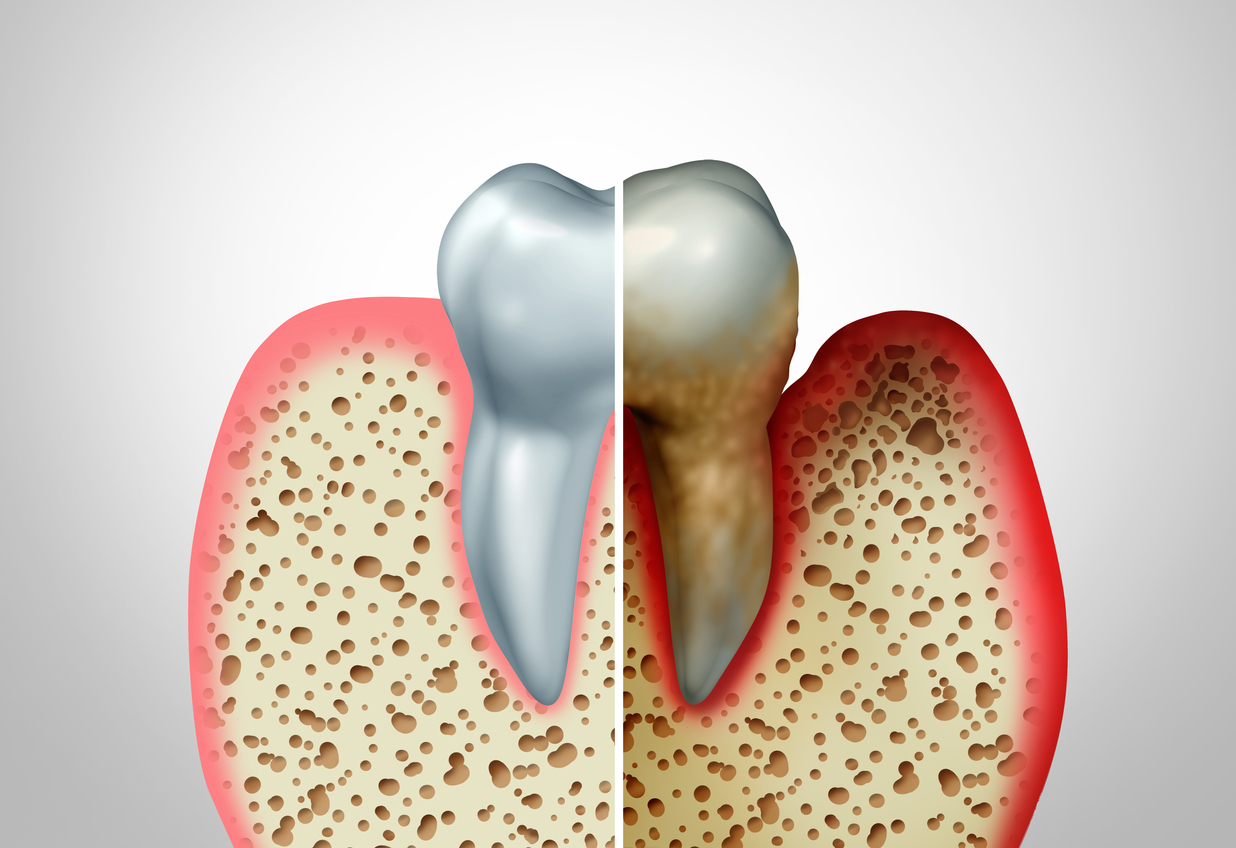 Gingivitis is a common ailment of the gums that causes inflammation as a result of bacterial growth. If you find blood on your toothbrush or when flossing, that may be considered one of the first signs of such gum disease. It should be treated as soon as possible or it can lead to periodontal disease.

Looking for a dentist?
Find dentists near you and book your next appointment online
Search

Key Differences Between Gingivitis and Periodontitis, the Stages of Gum Disease

In the early stages, gingivitis symptoms involve a build up of bacteria, which in turn causes the gums to become inflamed. As a result, they bleed easily while brushing or flossing. However, it is important to note that the teeth themselves are still held firmly in place and there is no damage to the tissues, or the bone structure.

If this is left untreated, these early gingivitis symptoms can sometimes lead to periodontitis. This particular form of gum disease causes the inner layer of the gum as well as the bone to be separated from the teeth and subsequently form pockets. As a result, these pockets can easily become filled with food debris and thus become infected.

While the body’s immune system battles these infections, the aforementioned bacterial plaque spreads below the gum line. The emission of toxins by both sides (the bacteria as well as the enzymes involved in fighting the infection) result in the breakdown of the bone and connective tissues that hold the teeth in their place.

With the progression of this gum disease, the pockets enlarge, and further breakdown of bone and connective tissue occurs. This makes the teeth loose and can lead to tooth loss. This form of gum disease is the leading cause of tooth loss in adults.

What are Some Causes of Gum Disease

Plaques resulting from bacterial growth are usually the primary cause of gum disease. However, the following factors can also be causative agents when it comes to periodontal disease:

Signs and Symptoms of Gum Disease

Gum disease symptoms are usually painless and subtle and, therefore, progress without the patient being aware at times. However, there may be some warning signs. There are symptoms that illustrate how it may be one form of the disease or the other, depending on the severity. Some commonplace symptoms of gum disease follow:

Even if the above symptoms are not noted it does not mean that a person does not have some form of a gum disease. Some forms only affect certain teeth like the molars in the back and so might make it harder for symptoms to appear obviously visible. A periodontist or a dentist are the only people qualified to determine if a person has a gum disease or not.

How Can Your Dentist Treat Gingivitis?

Gingivitis treatment can be approached from different ways. The following are some of the options on that score:

Looking for a dentist?
Find dentists near you and book your next appointment online
Search

Does Gingivitis Treatment Really Work?How Lengthy Can the Treatment for Gingivitis Be?What are Some Advantages of Gum TreatmentHow Does Scaling and Root Planning Help?What are Easy Ways to Prevent Gum Disease

Gingivitis treatment, depending on the phase of the gum disease, can actually work in the sense that it can reverse the damage. For example, if caught earl,y gingivitis can be undone by following three simple steps: visiting the dentist regularly for clinical cleanings, brushing your teeth regularly (preferably twice a day), and flossing regularly as well.

Anti-bacterial mouthwash can be used regularly as well to keep the mouth bacteria free which in turn will prevent any plaque development which is the first step towards any gum disease including, but not limited to, gingivitis. However, if not caught early, gingivitis causes (as we read above) periodontal disease which in its advanced stages can cause irreversible damage.

How Lengthy Can the Treatment for Gingivitis Be?

The length of the treatment depends on various factors. Gingivitis causes periodontitis if not treated and depending on the magnitude of the infection it may take quite some time with the patient visiting his/her dentist regularly for cleaning.

It also depends on the treatment being employed and how good the patient is with oral health routine at home: do they brush and floss regularly or not, for example. Early stages of gingivitis can be removed in approximately two weeks with good care.

What are Some Advantages of Gum Treatment

Gingivitis treatment can benefit you in a variety of ways, some of which are as follows:

How Does Scaling and Root Planning Help?

As we know, gingivitis causes damage to your oral health and one of the treatments for this gum disease is SRP (Scaling and Root Planning). It is a non-invasive method of vigorous cleaning i.e. scraping away plaque from the teeth and gums and smoothing out teeth roots to prevent them from being loose or shifting.

Your dentist will determine, after a careful examination of your gums and teeth, whether you are a suitable candidate for the treatment or not. There are of course risks with every treatment in the form of side effects, depending on the patient and their particular condition. But generally, SRP is not damaging to the oral health of the patient. Scaling does not damage teeth and smoothing out of a tooth root is also not detrimental.

What are Easy Ways to Prevent Gum Disease

Gum disease causes significant damage and if the following steps are taken seriously, the chances of preventing it are very high.

By following these methods you will develop a habit of good oral hygiene and, therefore, help prevent any sort of gum problems.

Looking for a dentist?
Find dentists near you and book your next appointment online
Search
Find a dentist near me